Northrop Grumman to build satellites at its factory in Virginia 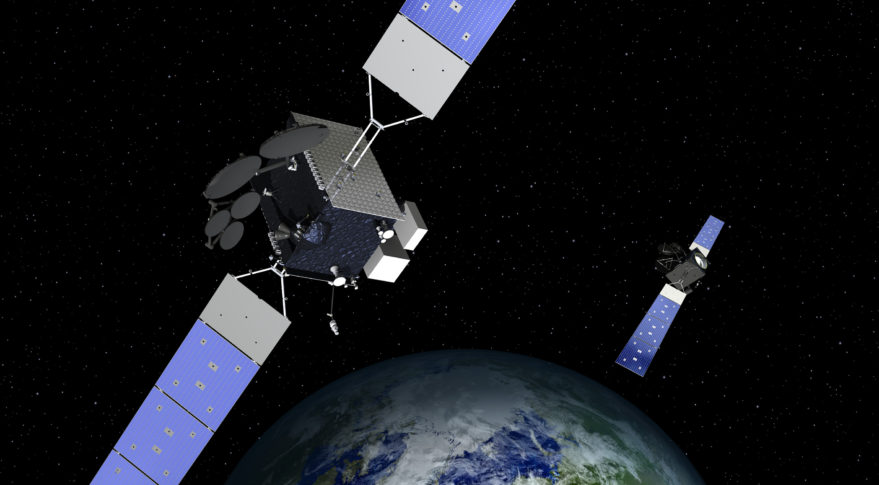 Northrop Grumman will build two satellites for Space Norway, each equipped with payloads for Inmarsat, the Norwegian Ministry of Defense, and the US Air Force.

Space Norway announced the purchase July 3, having down selected between Northrop Grumman and an unnamed, competing US satellite manufacturer. SpaceX will launch both satellites on a Falcon 9 rocket in late 2022, Space Norway said.

“The communications gap in the arctic is the key focus from our side, and the best solution to solve that is through satellite,” Kjell-Ove Skare, Space Norway’s ASBM program director, said in an interview. “We found this [highly elliptical orbit] mission to be the most cost effective way of providing these capabilities.”

Established in 2014, Space Norway is a state-run company tasked with procuring the ASBM constellation. Skare declined to name the other competitor for the ASBM manufacturing contract, but said Northrop Grumman won on price.

Stig Nilsson, a colonel in the Norwegian Ministry of Defence’s Department for Defence Policy and Long Term Planning, said in April that the ministry chose to fly multiple payloads on the same spacecraft after concluding that standalone satellites would be too expensive. Other architectures such as a low or medium-Earth orbit constellation were evaluated, Nilsson said, but were deemed unsuitable for Norway’s current needs.

“We think that in the short to medium term perspective, the only solution that can really achieve the ambition of broadband in the north is through a national system like this,” he said in an interview at Space Symposium.

The ASBM satellites will each carry an X-band payload for the Norwegian Ministry of Defense, a U.S. Air Force Extremely High Frequency communications payload, and a commercial Ka-band payload operated by Space Norway and leased by British satellite operator Inmarsat.

Nilsson said the Norwegian MoD payloads will be interoperable with the U.S.’s Wideband Global Satcom constellation.

Skare said the ASBM satellites are identical in design, with the only notable difference being that one may carry a radiation monitoring sensor. Space Norway said the ASBM constellation is fully financed with customer agreements through its expected 15-year service life.

The ASBM spacecraft will weigh 2,000 kilograms each — slightly lighter than the average large communications satellite — and will each generate 6 kilowatts of power. Northrop Grumman spokesperson Vicki Cox said the company is building the satellites on GEOStar-3 platforms — the last new spacecraft chassis Orbital Science introduced before merging with ATK in 2015 getting acquired by Northrop Grumman last year.

Ground station operator KSAT, of which Space Norway owns 50 percent, said it will build four new antennas ahead of the ASBM Falcon 9 launch to provide communications services to the twin satellites.

Inmarsat said that Space Norway’s commercial payloads will extend its Global Xpress Ka-band connectivity service — which currently consists of four geostationary satellites — into the arctic. There, Inmarsat will compete more directly with rival Iridium, whose narrowband low Earth orbit constellation is polar, making it one of the only means of connectivity at high latitudes.

Inmarsat said the ASBM Ka-band payloads will extend Global Xpress beyond its current limitation of 75 degrees above the equator. Inmarsat spokesperson Jonathan Sinnatt said the ASBM payloads will also increase the throughput Global Xpress customers receive between 65 and 75 degrees, since the look angle for geostationary satellites there results in weaker signals compared to more southern latitudes.

Inmarsat is calling its new payloads GX-10A and GX-10B. The leased payloads will precede the 2023 launch of three satellites Inmarsat ordered from Airbus Defense and Space in May. Inmarsat has three more satellites — GX-5, Inmarsat-6A and Inmarsat-6B — scheduled to launch before the ASBM network.

Northrop Grumman announced an $82 million contract from the Air Force to develop a next-generation ground system that will provide telemetry, cybersecurity and control for EPS and EPS-R payloads.

Skare said the Space Norway satellites will circle the Earth in 16 hours. The satellites will shut off communications services as they swing close to the Earth in the south, and reactivate service during the longer stretch of their elliptical orbits over the north, he said.

Skare said each satellite will spend around 10 hours in the ‘active arc’ part of their coverage, and will ensure seamless handovers from one satellite to another. The satellites will provide communications services for fisheries, energy sector customers, rescue operations and other applications, according to the parties involved.

Since the satellites will use non-geosynchronous orbits, they will move across the sky, but not so fast that flat, electronically steered antennas become necessary, Skare said. Maritime vessels already have parabolic tracking antennas to accommodate movement caused by waves, which will be sufficient to adjust to gradual changes in satellite location, he said.