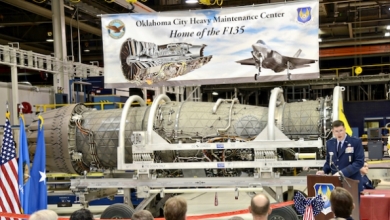 Pratt & Whitney, a division of United Technologies Corp., announced an expansion of its Military Aftermarket Services in Oklahoma. Pratt & Whitney plans to make a multimillion-dollar investment to upgrade existing facilities, supporting sustainment operations at the Oklahoma City Air Logistics Complex based at Tinker Air Force Base. This expansion will create more than 100 jobs over the next several years.

“Pratt & Whitney has a long-standing partnership with Oklahoma City and the State of Oklahoma. This expansion gives us access to a talented workforce, which will help us to continue to deliver on customer commitments. Oklahoma City has been a great municipal partner and we are pleased to grow our operations here.” said Kevin Kirkpatrick, Pratt & Whitney’s vice president for military engines sustainment operations.

“Aerospace has a $44 billion impact on our state, and we are working to further strengthen and grow this industry,” said Oklahoma Governor Kevin Stitt. “As the site of the largest air depot in the U.S. Department of Defense, Oklahoma is a natural fit for companies like Pratt & Whitney. I appreciate their commitment to growing and investing in Oklahoma and look forward to seeing the company continue to advance.”

“Aerospace is rapidly becoming one of the pillars of Oklahoma City’s economy, and it’s because of the investments being made by companies like Pratt & Whitney,” said Oklahoma City Mayor David Holt.   “We’re excited for this announcement and the promise of more high-paying jobs for our citizens.”

Pratt & Whitney’s presence in Oklahoma City has grown ten-fold over the past fifteen years, as sustainment operations at Tinker Air Force Base have grown to support more than a dozen engine types, including Pratt & Whitney military engines such as the F135, F119, and F117. Additionally, this expansion will help meet the depot-level maintenance demands of the ever growing F135 engine fleet, which is expected to double in the next three years.

With more than 7,000 military engines in service around the globe, Pratt & Whitney is laser-focused on sustainment and maintaining mission readiness for our customers’ fleets. The partnership with Tinker’s Oklahoma City Air Logistics Complex enables Pratt & Whitney and the U.S. Air Force to perform depot maintenance on F117, F119 and F135 engines, in addition to special technology coatings operations. Under the partnership arrangement, Pratt & Whitney provides the overall management, technical support and materials management, while the Air Force provides highly capable mechanics and extensive back shop capabilities.