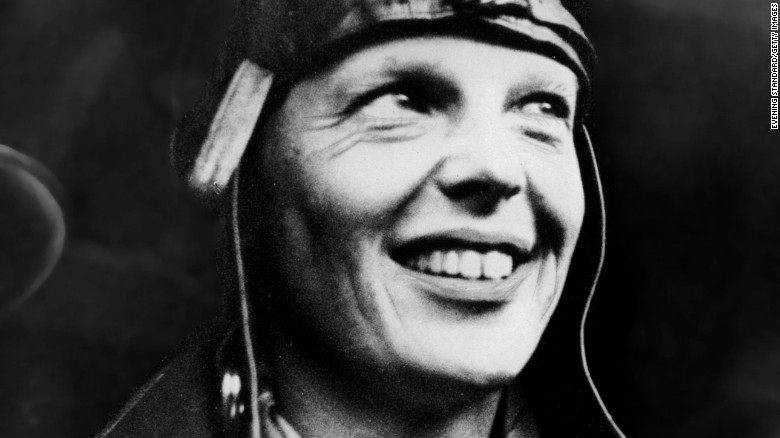 Amelia Earhart was a trailblazing pilot and an OG girl-power icon who broke gender stereotypes along with aviation records.

In June 1937, after a botched attempt, she set out from Miami with an ambitious goal: to become the first woman to fly around the world. Alongside navigator Fred Noonan in her trusty Lockhead Electra, she made it more than two-thirds the way around the globe before embarking on a long flight over the Pacific. Then, on July 2, she vanished from the skies forever.

Her disappearance — Earhart’s body was never found — became one of the greatest unsolved mysteries of the 20th century and turned her into a symbol for women’s empowerment.

So on Amelia Earhart Day, which honors her birth on July 24, 1897, here’s a look at the pioneering aviator’s brief life and fascinating legacy.

The devil works hard, but she worked harder

“It was a thing of rusty wire and wood and looked not at all interesting,” she said, according to the bio on her official website.

But after she took her first airplane ride in 1920, when she was 23, she was hooked. The next year, she started taking flying lessons. It took her more than a year to master flying solo — she sometimes had trouble with landings — but she eventually earned her pilot’s license from the National Aeronautics Association.

Things took off from there, and Earhart soon was breaking the highest of glass ceilings.

She almost had a medical career

During the First World War, Earhart worked as a Red Cross nurse’s aide in Canada. After the war she enrolled at Columbia University as a pre-med student. That was, until the sweet beckoning of air travel lured her out of the classroom and into the clouds. By 1921, she had begun flying lessons with Neta Snook, a female flight instructor. Within months Earhart purchased her first airplane, which she nicknamed “Canary” for its sunny hue.
She broke lots of aviation records (or at least more than you and me)

Less than a year after receiving her license, Earhart became the first woman to breach 14,000 feet solo.

In 1932 she became the first woman — and the second pilot after Charles Lindbergh  to fly solo across the Atlantic Ocean. Despite poor weather and mechanical problems, she made it from Newfoundland to Ireland, making headlines worldwide.

Three years later she became the first person — man or woman — to fly solo from the Hawaiian islands to the US mainland.

As a girl Earhart was a tomboy who hunted rats with a .22 rifle. As a woman she fought for gender equality in the skies.

In 1929 she joined other women aviators in forming The Ninety-Nines, an organization for female pilots. The group took its name from the 99 women who became charter members and used scholarships, education and financial support to promote female aviators.

There are many theories about what happened to her

The US government holds that Earhart and Noonan crashed and sunk in the Pacific, perishing at the mercy of the sea.

But aviation and history buffs have many other theories:

Her flight plan on her last fateful trip was from New Guinea to Howland Island, a tiny island in the central Pacific. But some suggest the aviator died as a castaway on another small island 350 miles south of Howland. This theory is backed up by the 1940 discovery of a human skeleton on the island, although there are disputes about whether the bones belonged to a woman or a man.

Some observers believe this photo shows Earhart, center, and navigator Fred Noonan, far left, in the Marshall Islands after they disappeared.

Then there’s the theory ignited by the 1970 book “Amelia Earhart Lives,” by Joe Klaas, who argues the aviator never actually died in 1937 but served as a spy during World War II. After the war, Klaas wrote, Earhart returned secretly to the US, changed her name and lived quietly as a New Jersey housewife named Irene Bolam. Yes, you heard that right. The theory lost some of its allure when the real-life Bolam herself a pilot denied the claims, sued the book’s publisher and won.