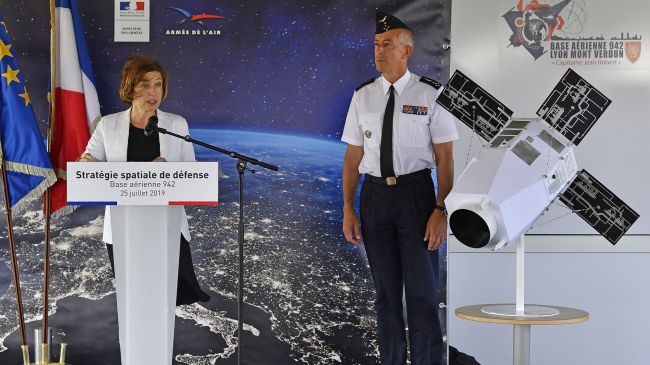 Months after President Donald Trump announced the creation of the US Space Force, France is beginning to lay the groundwork for its own version.

French President Emmanuel Macron announced last month that the nation’s air force will establish a space command for the purpose of national defense, particularly to protect of French satellites.

Last week, French Minister of Defense Florence Parly detailed the nation’s plan for its new space force, which involves equipping satellites with machine guns and lasers, according to the French news weekly Le Point.
First, the country will launch next-generation Syracuse satellites equipped with cameras that will be able to identify threats in space, such as anti-satellite weapons.

The upgraded Syracuse satellites will be armed with either submachine guns or lasers that could disable or even destroy another satellite, according to Le Point; France aims to have those space weapons fully operational in orbit by 2030.

While the international Outer Space Treaty prohibits the testing of weapons of mass destruction or nuclear weapons in orbit, and another United Nations treaty prohibits the weaponization of outer space, France has no intention of violating those treaties or initiating any space battles with its satellites, Parly said during a speech at Air Base 942 Lyon Mont-Verdun on July 26.

“We do not want to embark on a space arms race,” Parly said. “We will conduct a reasoned arsenalization.”

Parly announced that the French air force would receive an additional 700 million euros (around $780 million) in addition to its existing €3.6 billion (about $40 billion) budget for space activities between 2019 and 2025. The new space command will consist of 220 personnel from the French Air Forces’ Joint Space Command, the Operational Center for Military Surveillance of Space Objects (COSMOS) and the Satellite Observation Military Center (CMOS). The space force will operate from the new Air Force Space Operations Center in Toulouse.