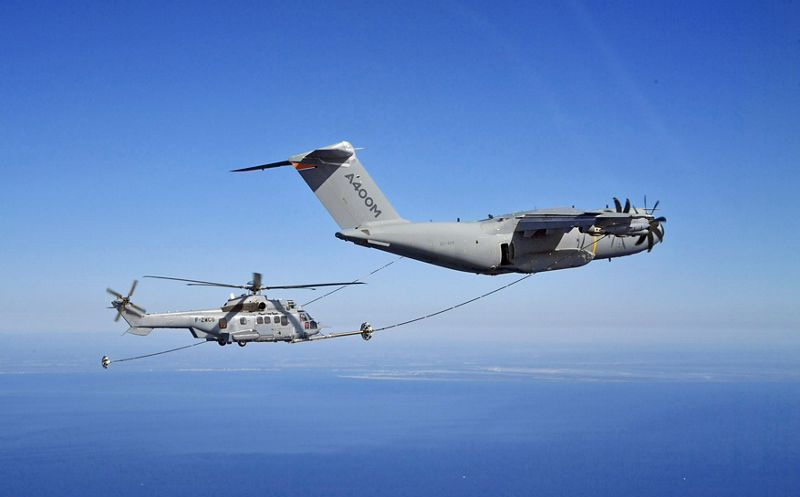 The Airbus A400M new generation airlifter has successfully achieved its first helicopter air-to-air refueling contacts with an H225M. Over the course of 4 flights, operated in day conditions over the south of France, the A400M performed 51 dry contacts marking a decisive milestone towards its full capability as a tanker. These tests were performed under the coordination of the French “DGA Essais en vol” flight test center.

The tests, involving no fuel and performed between 1,000 ft. and 10,000 ft. at flight speeds as low as 105 knots, confirmed the positive results of previous proximity flights conducted at the beginning of 2019. The next step in the flight test program will involve wet contact operations scheduled to take place before the end of 2019 ahead of final certification in 2021.

The flight test campaign also included the first proximity trials between the A400M and an H160 helicopter requested by the French Defense Procurement Agency (DGA) in the frame of the feasibility study for the Guépard (future military multirole helicopter for the French armed forces). Tests were performed successfully.

The A400M is certified to be quickly configured as a tanker, not requiring a dedicated aircraft version. The A400M carries up to 50.8 tons (111,600 lb) of fuel in its wings and center wing box, without compromising any cargo hold area. Two additional cargo hold tanks can also be installed, providing an additional 5.7 tons (11,400 lb) of fuel each. The fuel carried in the extra tanks can be of a different nature to the fuel in the main tanks. This enables the A400M to cater for the needs of different types of receiver aircraft.

As a tanker, the A400M has already demonstrated its ability to refuel fighter receivers such as Eurofighter, Rafale, Tornado or F/A-18 at their preferred speeds and altitudes, and is also able to refuel other large aircraft such as another A400M for buddy refueling, C295 or C-130.

Helicopter air-to-air refueling is a military tactical operation that involves low speeds and low altitudes. After this achievement and its final certification the A400M will become one of the few tanker aircraft in the world capable of performing such an operation.