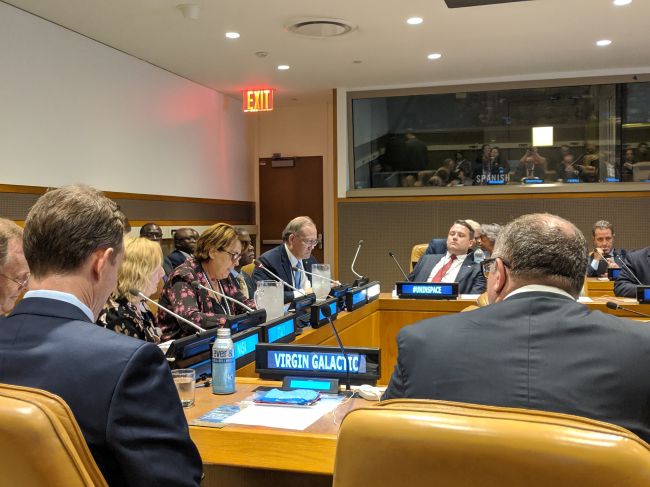 At the 74th session of the U.N. General Assembly (UNGA), UNOOSA welcomed Avio alongside representatives from Virgin Galactic, Maxar, NASA, the National Space Council, Italy and Zambia. The meeting, a side event at the UNGA, focused on how space can become more accessible, peaceful and entwined with efforts to mitigate climate change.

UNOOSA’s partnership with Avio, announced on the day of the event (Sept. 23), is part of the office’s Access to Space for All initiative, which they hope will make the benefits of space and space-based research available to people from every background and location. More specifically, the partnership with Avio aims to provide U.N. member states, especially developing countries, the opportunity to apply to put experiments on a satellite for free.

The cooperative effort would allow member states who are accepted to access satellite slots for 1U cubesats or aggregates, which would launch into low Earth orbit in October 2020. For each launch, those selected will be allotted about the same amount of payload space as there is on three 1U cubesats.

Avio has so far made satellite slots for three separate launches available on their VEGA launch vehicle. The partnership aims to support “technological learning and capacity-building,” according to a statement.

“This project will provide selected institutions with a unique opportunity to launch their space technology free of charge, expanding access to the benefits of space,” UNOOSA Director Simonetta Di Pippo said in the same statement.

This partnership and the Access to Space for All initiative were discussed at the UNGA event within the larger context of the U.N. Sustainable Development Goals (SDG), which were set by the UNGA in 2015 for 2030.

Di Pippo said further that this serves as evidence that member states do, in fact, rely heavily on space for their economies and societies as a whole. “Developing and emerging countries are getting more and more interested in being involved … so what we have to do is to help them, if you want, in a sort of bottom-up approach, where we help them in becoming new players in new spacefaring countries, but in a responsible manner.”

In other words, UNOOSA hopes to support developing nations to become more involved in space activities for many reasons but specifically, in part, because it supports the 169 targets of the 2030 SDG. UNOOSA aims to increase space access in ways that Di Pippo describes as “responsible,” meaning they will adhere to guidelines regarding issues such as “space junk” and climate change because, as Di Pippo said, “Space is also extremely important for climate action … to maintain the scientific model, to be able to understand what’s going on, how climate change is linked to these extreme disasters we’re experiencing.”

“Part of the challenge that we face … is that space has become so pervasive that it’s invisible and we forget how important it is to every aspect of our daily lives. And if there’s any silver lining to some of the issues that have been happening, it shows how important space and satellite infrastructure is to dealing with these giant global issues,” Mike Gold, vice president of regulatory and policy at Maxar Technologies, said at the event.