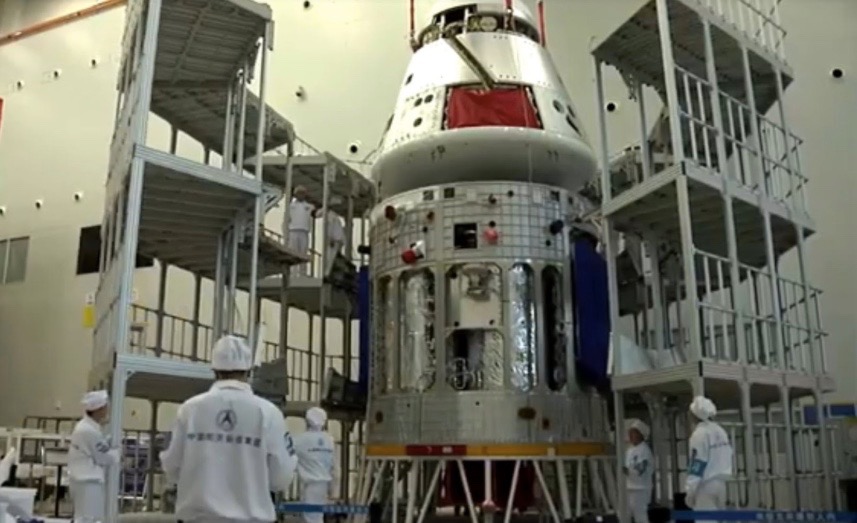 China is developing a next-generation spacecraft for human spaceflight that would allow astronauts to travel to the moon and other deep-space destinations.

China became the third country to independently launch astronauts in 2003 when Yang Liwei orbited Earth in the Shenzhou-5 spacecraft. And while the country plans to soon begin constructing a modular space station, China is apparently already looking beyond to eventual missions to the moon — and potentially beyond.

A recent promo video from the China Academy of Space Technology (CAST), a state-owned spacecraft and satellite manufacturer, has given us the best look yet at the new-generation crewed craft, which is capable of deep-space travel.

The two-module spacecraft consists of a crew module and a service module, which will provide propulsion, power and life support for the crew section. The spacecraft is up to 30 feet (9 meters) long and has a maximum mass at liftoff of around 22 tons (20 metric tons).

The crew module will be partially reusable, while the spacecraft as a whole features a modular design that will allow it to be constructed to meet different mission demands.

China currently uses the 8.6-ton (7.8 metric tons) Shenzhou spacecraft, which can carry three astronauts to low Earth orbit (LEO). However, Shenzhou is not designed for the harsh radiation environment of deep space, nor can it survive the high-velocity reentry into Earth’s atmosphere that such missions must endure.

The new spacecraft, which has not yet been named, will be capable of venturing beyond LEO and carrying four to six astronauts.

In 2016, China launched a scaled, boilerplate version of the crew module to test reentry and landing.

“These capabilities tell us that China is committed to long-term human spaceflight at a slow but consistent pace,” said Joan Johnson-Freese, a professor in the National Security Affairs Department at the U.S. Naval War College in Newport, Rhode Island.

It is the opinion of Johnson-Freese that, “what the US did as The Hare — fast, but sporadic — China is now doing as The Tortoise, slow and methodically.”

Johnson-Freese also noted that the US has some very exciting programs in varying stages of development and with varying levels of budget commitments, which will enable significant exploration feats if they reach fruition.

NASA is developing the expendable Orion spacecraft for deep-space travel, with a Europe-built service module, which will be the main crew vehicle for the Artemis luna-exploration program.

The Long March 5B has also been designed to launch the 22-ton (20 metric tons) modules for China’s planned station in LEO. If the test flight goes well, China can then begin constructing its space station with the launch of the core module Tianhe, likely in 2021.

Li Ming, vice president of CAST, said last year that, following demonstrations, the new spacecraft can be brought into use quickly and can even be used for flights to the Chinese space station.

“The new generation has reusable abilities … so the government can reduce the cost to fly to the space station,” Li explained.

Chinese space officials have stated that the country is looking to carry out crewed missions to the moon in the 2030s. Though such a project has not been approved, early development is underway for a superheavy-lift rocket, the Long March 9, similar in capabilities to NASA’s Saturn V or the American space agency’s in-development Space Launch System.