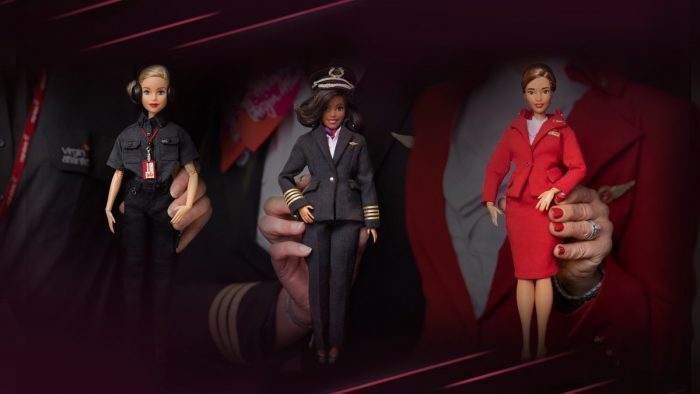 Virgin Atlantic has revealed an exciting collaboration with the iconic Barbie brand, destined to inspire the next generation of aviators. With a firm goal of getting more women into aviation, Virgin has unveiled its very own Barbies – smart, career-driven female role models so that all girls can #seeherfly.

With the recently inaugural flight of Virgin Atlantic’s A350-1000, the airline has given a timely reminder that life’s not all about Upper Class and transatlantic trips. The UK carrier has teamed up with Barbie, a classic female icon, to encourage more girls to pursue STEM (science, technology, engineering and math) subjects and, ultimately, to choose aviation as a career.

Barbie herself has undergone major transformations in recent years, evolving from the big-breasted, tiny waisted, bottle blonde of yesteryear into a doll that’s more aligned with a healthy body image. She’s had more than 200 careers over her lifespan, and this rather fitting collaboration will see her in three more, all in accurate Virgin Atlantic uniform.

Working in partnership with Barbie and an initiative called the Dream Gap Project, Virgin has helped to design female Barbie characters in Virgin Atlantic careers. There’s a pilot, an engineer and a flight attendant, all of which showcase a diverse array of ethnicities and body types, in line with changes to the retail Barbie line over recent years.

Phil Maher, our EVP Operations at Virgin commented on the initiative, saying, “It’s essential that Virgin Atlantic plays a pivotal role in encouraging women to succeed in STEM careers.  It’s evident that for those women who do become pilots and engineers, career satisfaction is exceptionally high, and it’s no surprise that job satisfaction is exceptionally high.   It’s essential we showcase to girls of all ages just how fulfilling a career in our industry can be and our partnership with Barbie is just one of the steps we’re undertaking to achieve this.”

The initiative is part of a wider project to encourage women into STEM and aviation careers. Virgin is working with a charity called WE on a project called the Passport for Change, which aims to inspire young people. As well as the Barbie dolls, Virgin will be conducting school visits and trips to engineering hangars, where real life role models will provide inspiration to young people.

“We really do have a long way to go before these barriers disappear altogether. There are fundamental gender issues in aviation and aerospace.”

But the problem is not only British, as research by Statista, shared by Forbes, show a trend worldwide for aviation to be a male-dominated industry. According to the chart (which details employment levels in 2018 of the largest western carriers), United and Lufthansa were leading the way with 7.4% and 7% of female pilots respectively.

British Airways and Air Canada were next, boasting 5.9% and 5.5% women pilots, while Emirates and Norwegian were way off down at the bottom, with 1.5% and 1% respectively. Virgin Atlantic doesn’t fare much better, having just 3.2% of pilots of the female gender.

Overall, the Middle East and Asia have the lowest employment of women pilots; however, India is bucking the trend with more than 12%, the most of any region in the world.