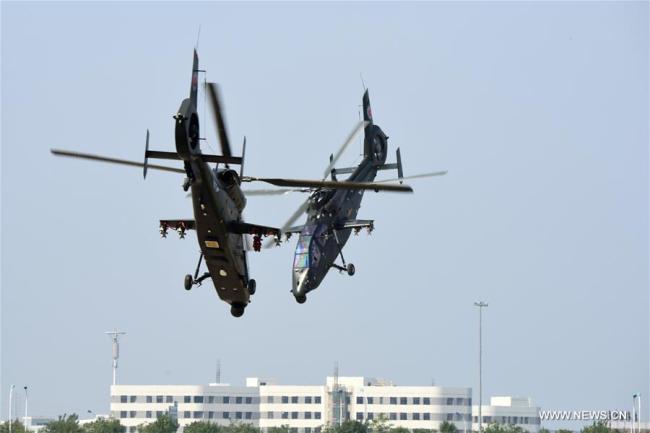 Hovering over the air show area, a fleet of China’s new self-developed Z-20 helicopters took part in a flight demonstration at a helicopter expo in northern China’s Tianjin Municipality.

The multifunctional helicopter, developed by the state-owned Aviation Industry Corporation of China (AVIC), made its first public appearance during a massive National Day parade in October.

Li Linhua, chief technologist with the helicopter division of the AVIC, said the Z-20 is a medium-lift helicopter with double China-made engines. It can work in complicated meteorological conditions and has good adaptability to high elevations.

“The innovation of the Z-20 helicopter plays a leading role in China’s helicopter industry development in the future,” Chen said.

Helicopters have become one of the fastest-growing segments of China’s aviation industry, with an average growth rate of 25 percent over the past five years.

The helicopter family has developed systematically with various models, witnessing the continuous improvement of innovation capabilities. They can be used in public services, emergency rescue, flight training, air tours and traditional agricultural work.

As the leading company of China’s helicopter industry, AVIC Helicopter adheres to the development path of independent innovation and has developed various piloted and unmanned helicopters.

LvJie, general manager of AVIC Helicopter, said the series of AC311, AC312, AC313 civilian helicopters developed by the company have received type certificates from the Civil Aviation Administration of China and have been put into use in the fields of forest fire prevention, police aviation and search and rescue, etc.

“Among them, AC313 has become the core equipment for forest fire protection, and AC312 and AC311 helicopters have been used for police aviation in nine provinces and municipalities of China,” Lv said.

Moreover, the ‘heart’ engine for the helicopter has also made a breakthrough. Aircraft engine WZ16, a type of turboshaft engine jointly developed by the Aero Engine Corporation of China and French aviation giant Safran, has received a certificate from the Civil Aviation Administration of China.

The engine has a takeoff power of no less than 1,240 kW. It can be fitted into seven-tonne twin-engine helicopters. It is characterized by high reliability, low-cost maintenance and has reached the level of advanced international civilian engines.

The 5th China Helicopter Exposition concluded with sales of 141 helicopters surpassing 10 billion yuan ($1.4 billion), according to the organizers.