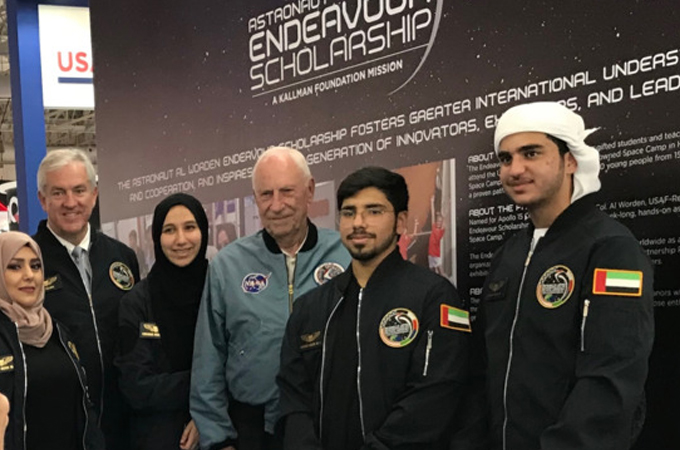 The inaugural mission of the “Astronaut Al Worden Endeavour Scholarship” program took off recently with the presentation of the first awards to four Emirati students and two educators during a ceremony in the USA Partnership Pavilion at the Dubai Airshow 2019.

They were joined by H.E. Dr. Mohammed Nasser Al Ahbabi, Director General of the UAE Space Agency; and John Rakolta, Jr., U.S. Ambassador to the United Arab Emirates, along with government, military and industry leaders to congratulate the winners of an all-expenses paid a week-long, hands-on astronaut training experience at the US Space and Rocket Center’s renowned Space Camp in Huntsville, AL.

The awards announced in Dubai are the first of 40 scheduled to be presented at major air shows around the world over the next two years.

“Current events, including the 50th anniversary this week of the Apollo 12 moon landing and the successful flight last month of the UAE’s first astronaut in space, Hazzaa AlMansoori, provide a unique opportunity to reflect on the positive impact space programs have had on society, and re-emphasize the need for continued support of public and private initiatives dedicated to aerospace exploration and commerce,” said Kallman. “Nation-to-nation, in partnership with the UAE Space Agency, industry partners around the world and the leaders of Space Camp, the premiere astronaut training experience, we’re proud to present the first Astronaut Al Worden Endeavour Scholarship to honor the past and launch the future of space exploration in the UAE.

As one of only 24 people who have flown from the Earth to the Moon and back, Worden is a role model for career engineers. In the decades following his historic 1971 flight, he has applied his business acumen, technical talents and passion for innovation to a wide range of interests in industry, academia and public service. In particular, he is an active advocate for the future engineering workforce — in all disciplines — and the communities in which they live and work around the world.

“As a lifelong advocate for STEM education and exploration, I am deeply honored and excited to congratulate the first recipients of this scholarship,” said Worden. “When you consider the decades of rigor and discipline it’s going to take to successfully put people from Earth on Mars, and that the UAE has plans for establishing a colony on Mars by 2117, we need to pick up the pace. The pipeline for STEM talent can handle a lot more volume!”

Since 1982, Space Camp has inspired the next generation of astronauts, engineers and scientists through an immersive program that includes astronaut training and simulated space missions. Space Camp alumni include NASA and European Space Agency (ESA) astronauts as well as engineers, scientists and technologists in myriad disciplines around the world.

“The Space Camp experience bonds like-minded space explorers through their training, missions and team experience,” Dr. Deborah Barnhart, CEO and Executive Director of the U.S. Space & Rocket Center, said. “Creating lasting relationships among nations is key to living and working in space and to accomplishing mankind’s next giant leap forward. In that same spirit, the Astronaut Al Worden Endeavour Scholarship heightens connections around the globe to achieve success in space for years to come.”