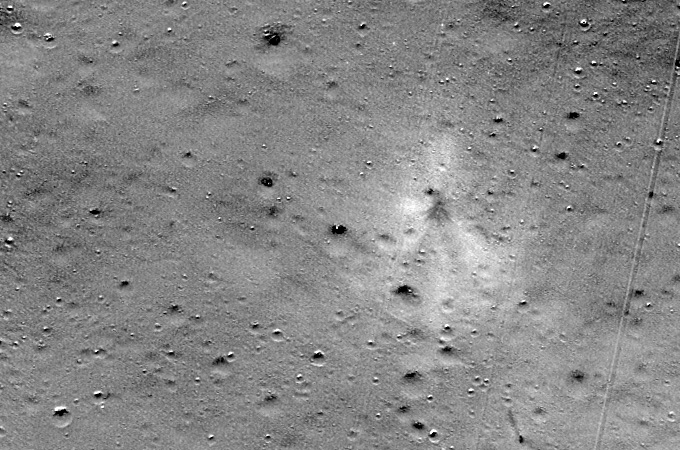 NASA, with the assistance of an amateur image analyst, has identified the crash site of India’s Vikram lunar lander, the agency announced recently.

NASA released images taken by the Lunar Reconnaissance Orbiter (LRO) showing the impact site and resulting debris field from Vikram, which attempted to make a soft landing in the south polar regions of the moon nearly three month ago as part of India’s Chandrayaan-2 mission. Contact was lost with the lander during its final phases of descent, about two kilometers above the surface.

LRO first imaged the landing site Sept. 17, but the poor lighting of the area made it difficult to identify where the spacecraft had come down. The project released the full images, allowing others to examine them.

Among them was an Indian amateur image analyst, Shanmuga Subramanian, who spotted what appeared to be a piece of debris about one kilometer from the expected landing location. He alerted the project, which confirmed the discovery. Follow-up images taken in mid-October and again in November identified the impact site, about 750 meters away from that initial piece of debris, as well as other debris.

The images confirm what had long been expected: that Vikram crashed while attempting to land. The Indian space agency ISRO has remained tight-lipped about the lander’s fate since losing contact, failing to even confirm that it had crashed. ISRO claimed in a September statement that Vikram “has been located by the orbiter of Chandrayaan-2,” but never released any images or other data to substantiate that finding.

In a written response to questions to the Lok Sabha, the lower house of India’s Parliament, Jitendra Singh, minister of state for the Department of Space, said that the Vikram lander “hard landed” on the moon half a kilometer from its projected landing site because of a problem with the lander’s braking thrusters.

The problem, Singh said in the statement, took place after the thrusters completed the first phase of the lander’s descent as expected. “During the second phase of descent, the reduction in velocity was more than the designed value,” he said. “Due to this deviation, the initial conditions at the start of the fine braking phase were beyond the designed parameters.”

The statement, though, didn’t elaborate on the cause of the “deviation,” and didn’t explicitly state that it crashed. ISRO hasn’t provided additional details since that statement.

Singh emphasized that despite the problems with the Vikram lander, the Chandrayaan-2 orbiter was working well, and should be able to operate for seven years. He stated that the total cost of the mission, including its launch on a GSLV Mark 3 rocket, was 9.7 billion rupees ($135 million).