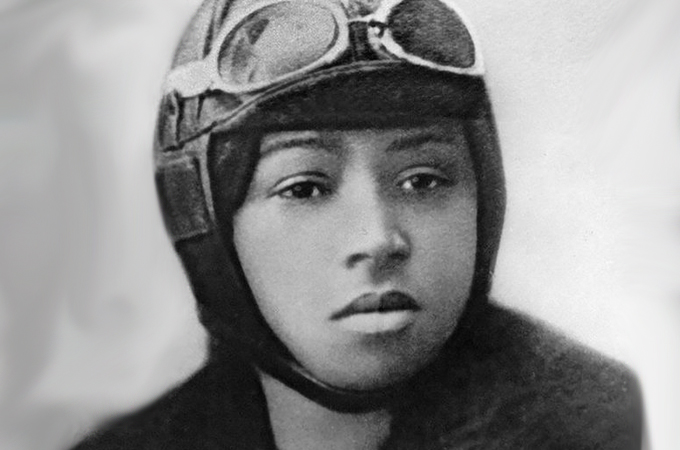 The story of the first black woman to receive her pilot’s license was highlighted in a 17-panel exhibit recently.

“Bessie Coleman and her Daughters” is part of the International Women’s Air & Space Museum Traveling Exhibition. The indoor educational exhibit details Coleman’s life and how she inspired generations of black female pilots and astronauts.

Coleman, who was born in 1892 on a farm in Texas, was the 10th of 13 children and grew up working in the cotton fields. Although Coleman missed a lot of school to work in the fields, she graduated from the eighth grade with high marks and attended one semester at an industrial college before dropping out to return home to work as a laundress. In 1915, she moved to Chicago to live with her two brothers. Her desire to become a pilot originated through talks with her brothers about French women flying planes in World War I. While she applied at several aviation schools, she was turned down each time. In 1920, after saving her money, she left for France, where she was accepted into flying school and obtained her pilot’s license. Her love of flying led her into becoming a stunt pilot, for which she landed a movie role. In 1923, Coleman bought her first plane, a WWI surplus Army training plane, and crashed it just a few days later. After recuperating, Coleman returned to flying and eventually purchased another plane and continued a career in stunt flying.

Every year on April 30, black aviators – men and women – fly in formation over Lincoln Cemetery in Chicago where Coleman is buried to drop flowers on her grave.

Aviation and aerospace fine art and photography, along with model aircraft from the South Carolina Military Museum in Columbia, will also be featured as part of the month-long exhibition.

The kickoff for the opening of the exhibit will be held at 9 a.m. Jan. 8 at Scott’s Branch Middle/High School, 9253 Alex Harvin Highway. Guests for the event will include Master Sgt. Jessica Mann and Staff Sgt. Athena R. Sanchez from Shaw Air Force Base’s 20th Component Maintenance Squadron.

Dana Smith and Jason Wolfe of the Pittsburg Institute of Aeronautics in Myrtle Beach will also offer information to students about careers in aviation and PIA history and an interactive exhibit.