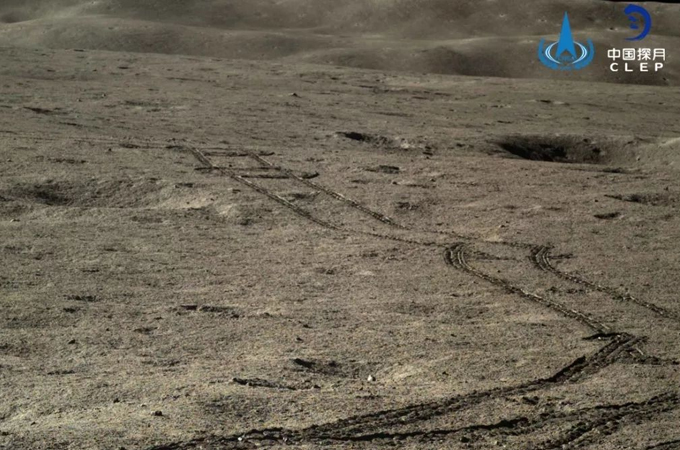 China hit a historic milestone on the moon recently as its Chang’e 4 lander and rover celebrated their first full year exploring the lunar far side.

The Chinese Chang’e 4 moon lander and its rover Yutu 2 officially completed their 13th lunar day in January, according to the state-run Xinhua news agency. The pair has switched to a dormant mode to sleep through the lunar night, according to the Lunar Exploration and Space Program Center of the China National Space Administration (CNSA).

Chang’e-4 probe launched to the moon on Dec. 8, 2018 and made the first-ever soft landing on the far side of the moon on Jan. 3, 2019. The spacecraft touched down in in the Von Kármán crater at the lunar South Pole-Aitken Basin, where they have been ever since.

As of Friday, the Yutu 2 rover has driven 1,173 feet (357.695 meters) on the moon’s far side, according to China’s state-run Xinhua news service. Yutu-2 (its name means Jade Rabbit-2) has worked much longer than its initial three-month design life, becoming the longest-working rover on the moon.

“The scientific instruments on the lander and rover worked as planned. The rover conducted explorations of several sites and photographed and conducted an infrared detection of a stone on the lunar surface, said the center,” Xinhua wrote of the mission Friday.

Chang’e-4 mission scientists have christened their landing site Statio Tianhe, Xinhua stated. “Tianhe” is Mandarin for the Milky Way and “Statio” is Latin for station.

Chang’e-4’s Yutu 2 rover has made several discoveries on the moon’s farside. Among them, it found that the lunar regolith around the Chang’e-4 lander contains the minerals olivine and pyroxene, which came from deep inside the moon.

With Chang’e-4 on the far side of the moon, CNSA has been relying on a relay satellite called Queqiao, which is stationed beyond the moon in a stable Lagrange point about 310,685 miles (500,000 kilometers) from Earth.  Zhang Lihua, the satellite’s chief designer, said it could last another 10 years, according to Xinhua.

“We will let the Queqiao work as long as possible. It could also provide communication for probes from other countries if they intend to explore the moon’s far side within the lifetime of the satellite,” Xinhua quoted Ye Peijian, a Chinese Academy of Sciences researcher and a senior space expert, as saying.

While the Chang’e-4 mission continues, China is looking ahead to its next lunar mission: Chang’e-5.

That new mission, which is expected to launch sometime in 2020, will launch another lander and rover to the moon on a mission to return lunar samples to Earth.