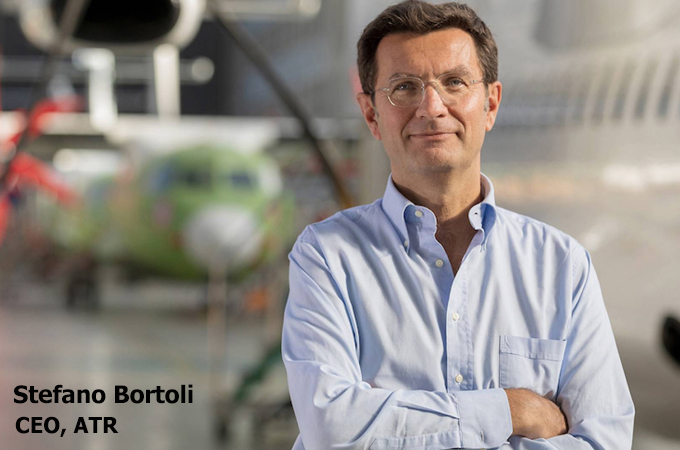 Stefano Bortoli was appointed by ATR’s shareholders, Airbus and Leonardo, as Chief Executive Officer of ATR in September 2018.

Prior to this position, Stefano Bortoli was President of the ATR Board and Senior Vice-President (SVP) Strategy and Sales of Leonardo’s Aircraft Division from March 2017. Previously, he served as SVP Sales and Marketing of Leonardo Helicopter division from 2015 to 2017, and as SVP Staff Functions &amp; Governance of Augusta Westland, from 2013 to 2015.

Between 2011 and 2013, he was Chief Executive Officer of Snai Group, an Italian firm specialised in the gaming market. From 2006 to 2011, he served as Group Chief Finance Officer (CFO) of Lottomatica/GTECH in the United States, also in the gaming industry.

From 1989 to 2006, Stefano Bortoli was Co-Director and CFO at Alenia Aeronautica.

Stefano Bortoli started his professional career in 1985 in Italy as Internal Auditor at the pharmaceutical firm Johnson and Johnson and later spent three years at Ispettorato IRI, an Italian state-owned holding company.

ATR recently delivered the first ever green financed aircraft to Swedish regional airline Braathens Regional Airlines, BRA. The aircraft is leased from Avation and is financed by Deutsche Bank. It is part of a new order for five 72-600s, all purchased by Avation from ATR and leased to BRA. Upon completion of the order in early 2020, the airline will itself operate an entirely ATR fleet, comprised of 15 ATR 72-600 aircraft.

This first ever Green Financing of an aircraft confirms the high sustainable value of the modern ATR turboprop aircraft. The ATR 72-600 aircraft has a significant environmental advantage over regional jets and other turboprops emitting 40% less CO2. Turboprops are more efficient than jets on short sectors as they accelerate air using less power, so use less fuel.

Stefano Bortoli, Chief Executive Officer of ATR, said, “It is only natural that the first Green Financing deal for a commercial aircraft would involve an ATR and BRA. Thanks to the innovation of the ATR design, it inherently benefits from its lighter fuselage and the efficiency of its turboprop, meaning it burns less fuel and emits less CO2. It also makes sense that BRA, the leading voice on responsible regional flying in Sweden, would upgrade its own fleet to an all ATR 72-600 one, benefitting from these advantages compared to its rivals. We are proud to launch Green Financing in commercial aviation and lead the way in terms of innovation and sustainable regional aviation. We are thankful to Avation for having the foresight and flexibility to establish the operating lease for this series of aircraft deliveries.”

Furthermore, Hokkaido Air System Co., Ltd (HAC), a JAL Group Company recently took delivery of the first two 42-600 aircraft from ATR. This delivery marks the first step in HAC’s replacement of its Saab 340 fleet. The delivery of this aircraft ensureS that essential regional air connectivity in Hokkaido can continue.

The ATR 42-600 will offer HAC increased capacity for the same operating costs – generating opportunities for the airline to increase revenues. It will also provide HAC’s passengers with a modern, comfortable cabin featuring latest generation 18”-wide seats as well as more space for luggage in the overhead bins.

ATR’s market estimates forecast that around 900 30-50 seat aircraft will soon need to be replaced as older and inefficient aircraft come to the end of their lives. The ATR 42-600 is part of ATR’s unique family of regional aircraft, including the ATR 72-600, the ATR 42-600S (Short Take-Off and Landing) and the ATR 72-600F, the only brand new regional freighter. Together, they represent the ideal and modern solution to ensure that essential connectivity is maintained for local communities all over the world, while flying sustainably, emitting up to 40% less CO2 compared with regional jets.