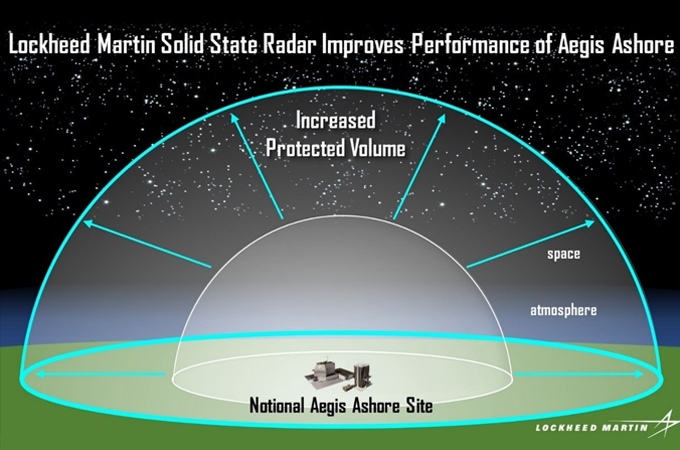 Through partnerships with the US Government, Spain, Japan and Canada, Lockheed Martin’s solid state radar (SSR) technology will provide front-line defense to nations around the world with cutting-edge air and missile defense capabilities. These nations are part of a growing SSR family of 24 platforms, ushering in the next generation of maritime and ground-based advanced radar technology. The basis of SSR is the Long Range Discrimination Radar (LRDR), which the Missile Defense Agency (MDA) selected Lockheed Martin to develop in 2015 with an on-track delivery set for 2020. In 2019 Lockheed Martin’s SSR for Aegis Ashore Japan was designated by the United States Government as AN/SPY-7(V)1.

SPY-7’s core technology is derived from the LRDR program, which has been declared Technical Readiness Level 7 by the US Government. The technology consists of a scalable and modular gallium nitride (GaN) based ‘subarray’ radar building block, providing advanced performance and increased efficiency and reliability to pace ever-evolving threats. As part of its investment into the advancement of SSR, Lockheed Martin built a Solid State Radar Integration Site to conduct detailed testing to prove the maturity of the system and reduce fielding risk. Scaled versions of the LRDR site will be utilized for future radar programs including Aegis Ashore Japan, Canadian Surface Combatant and MDA’s Homeland Defense Radar in Hawaii.

Solid state radar is a multi-mission system providing a wide range of capabilities, from passive situational awareness to integrated air and missile defense solutions. The combined capability and mission flexibility of Lockheed Martin’s SSR has gained the attention of new and current users of the Aegis Weapon System, the world’s premier air and missile defense combat suite.

While LRDR is the first program to utilize Lockheed Martin’s new SSR building blocks, over the past three years Lockheed Martin has consistently been selected in open competitions to equip an additional 24 platforms in four nations.

SPY-7 provides several times the performance of traditional SPY-1 radars and the ability to engage multiple targets simultaneously with the latest proven interceptors.

Spain’s Ministry of Defense stated its preference for Lockheed Martin’s technology for its five F-110 class frigates in 2017 and awarded the ship construction order to Navantia in 2019. These ships will host the first-ever S-band variants of the SPY-7 radar for the Spanish Navy. Production will be a collaboration between Lockheed Martin and Spanish company, Indra. When the frigates deploy in 2026 our SPY-7 variant will be integrated as part of the Aegis Weapon System. The frigates will also incorporate the International Aegis Fire Control Loop (IAFCL) integrated with SCOMBA, the national combat system developed by Navantia.

Including LRDR, the 24 Lockheed Martin SSR platforms selected to date represent a total of 91 antennas of varying sizes, collectively composed of over 15,000 subarrays. On LRDR alone, Lockheed Martin has produced an equivalent of eight Aegis shipsets to-date. The U.S. Government’s LRDR has a planned service life for decades to come and will be supported and maintained throughout that period. This ensures the US and its allies will have a large and stable base of cost-effective logistics and support for many years in the future.