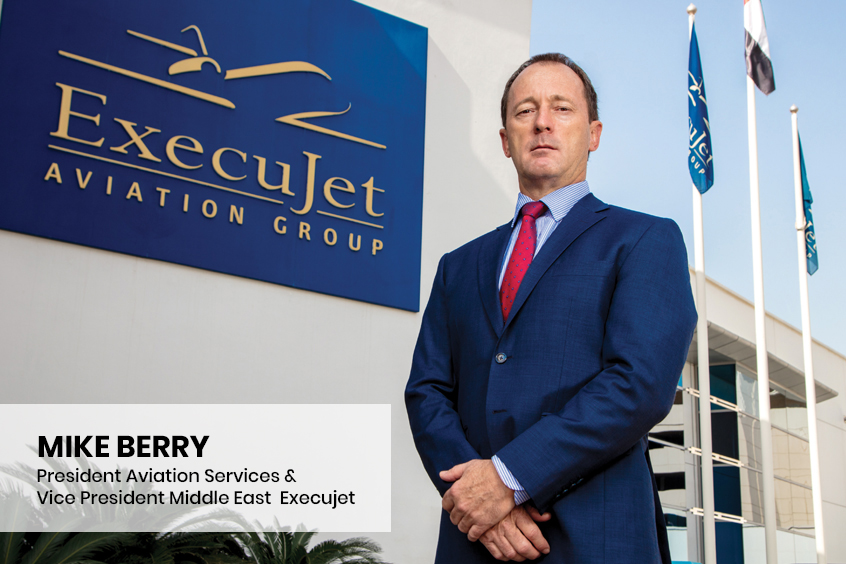 Having initially established himself as a Chartered Accountant in South Africa, Mike Berry has since been involved in a variety of industry sectors including manufacturing, insurance, telecommunication and aviation.

Mike joined ExecuJet Middle East in 2002 as a Financial Director. In 2004 Mike’s prominent ability in ExecuJet saw him progress to the role of Managing Director – Middle East, overseeing the general management of the region including new and pre-owned sales, product support, aircraft management, flight operations, FBO and maintenance services.
His main objective for the region focuses on the development of ExecuJet as the premier business aviation service and solutions provider. Having become one of the main contenders in the Middle East Aviation market, Mike is confident that ExecuJet will remain prominent in the region.

Since becoming the Managing Director, Mike has seen ExecuJet Middle East move into a state of the art facility at Dubai International Airport, expanding support capabilities with over 240 employees and includes plans to open a new facility at Dubai South.
In late 2015 Mike became President Aviation Services of ExecuJet and in 2017 expanded this role to the whole Luxaviation Group being appointed Executive VP Luxaviation Group in addition to his role as VP Middle East

Ideagen’s Q-Pulse, Q-Pulse Risk and Academy software will play a central part in ExecuJet MRO Services’ digital transformation program as it looks to grow the business following its recent acquisition by Dassault Aviation.

Dassault Aviation Company acquired ExecuJet MRO Services in March 2019, and took ownership of the company’s MRO facilities from Luxaviation. The acquisition strengthened the French airframer’s global support footprint with the addition of ExecuJet’s bases across the world, located in Africa, Asia, Australasia, Europe and the Middle East.

Q-Pulse, Q-Pulse Risk and Academy will now be rolled into each site, with the company’s compliance team working with Q-Pulse and Q-Pulse Risk while its technical staff focus on Academy. The project may also see ExecuJet adopt Ideagen’sPleaseReview software – its document review, redaction and co-authoring product – in the future.