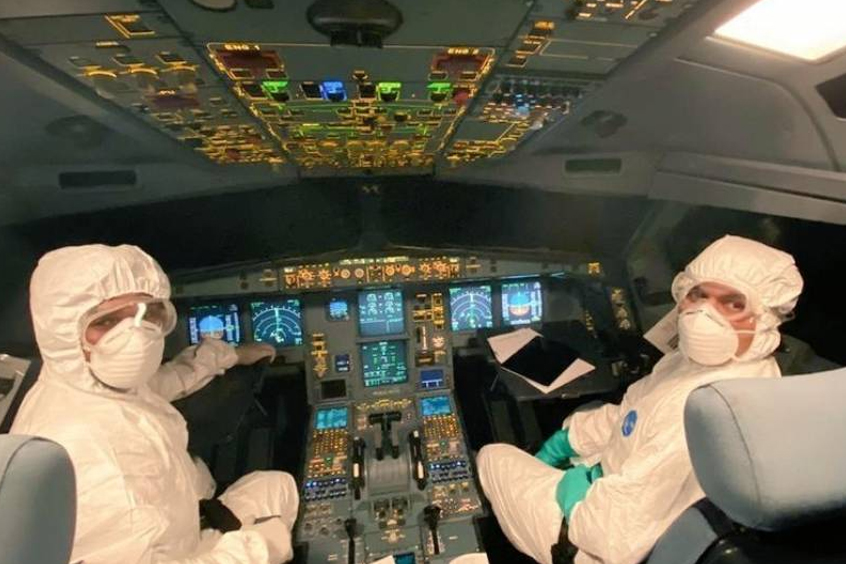 Drastic cuts in scheduled airline services in response to the COVID-19 virus outbreak and concern about public health risks spurred a significant surge in demand for private jet charter flights beginning in late January. However, restrictions on travel to some countries and concerns over risks to passengers and crew have meant that operators have had limited opportunity to capitalize on the situation.

Some operators have experienced difficulties in getting spare parts for aircraft. Operators have also been implementing measures to protect passengers and crew, including increased disinfection procedures. In some cases, flight departments are canceling trips in response to business travel bans imposed by their companies.

Initially, flights out of China were most in demand. However, as the coronavirus has spread to other countries in Asia and beyond, flight requests have increased worldwide.

Charter marketplace Avinode reported increases in the volume of flight requests departing China of more than 150 percent compared with the same period in 2019. It said the most significant spike in requests came after January 24, after the Chinese government had belatedly acknowledged human-to-human transmission and once confirmed cases in China increased above 1,I00.

In February, WingX, which tracks business aviation flights flown, told AIN it had not observed any major shifts in traffic out of China logged in January, beyond a continuation of the slight decline it had recorded in the fourth quarter of 2019. However, it did report “a sharp rise” in flights coming into Europe and North America from other parts of the world and added that data for the whole of February will likely provide a more complete picture.

According to Harry Clarke, Avinode’s head of insights and analytics, increases in requests for flights out of China came from all regions of the world, but especially for destinations such as Israel, Canada, Switzerland, the UK, Germany, and Australia. “As most of the flights departing China are intercontinental, 88 percent of requests are for long-range-capable aircraft,” he reported. “Of these, 50 percent of aircraft are ultra-long-range, 26 percent are heavy jets, 10 percent are VIP airliners, and 2 percent are airliners. The remaining 12 percent is split between super-midsize and midsize jets, with just 1 percent of requests for light jets. The most popular aircraft types are the Bombardier Global Express/XRS, Dassault Falcon 7X, and Bombardier Challenger 604/605.

Asia-based charter broker Apertus Aviation said that demand for flights from the region was already high due to the Lunar New Year holiday and that it increased markedly once the impact of the outbreak became clearer. “We have experienced a surge in inquiries, but there have also been lots of challenges in arranging flights due to the various regulations and restrictions,” company director Ringo Fan told AIN. “There have been lots of limitations for aircraft owners and crew, and this has effected availability.”

Fan said that Apertus now ensures that aircraft it books carry boxes of face masks and alcohol for disinfecting surfaces. “If this [the COVID-19 epidemic] continues for another four or five months it could have a very serious impact on the business, especially resulting from stock market losses and [problems faced by] foreign companies doing business in China,” he concluded.

UK-based charter broker Hunt & Palmer indicated that so far there has been little increase in demand for flights from Europe, the US and the Middle East. Executive aviation manager Julie Black told AIN that the company’s Hong Kong office had fielded requests for flights out of China, but that these had been impossible to arrange due to government restrictions.

However, Black, who is also deputy chair of the Air Charter Association, added that the complex and rapidly-changing response to COVID-19 is causing complications for trips elsewhere. She predicted that this could be a sign of further complications to come for the business aviation sector.

Albert Braha with US-based charter broker Apollo Jets told AIN that he has seen a “definite spike of around 10 percent” in demand for domestic and international flights. In his view, this is partly due to concerns about the perceived risk of flying with airlines and he added that many of those making requests are completely new to private charter. However, he confirmed that it has been hard to source aircraft and crew for some of the requested trips.

Flight booking platform PrivateFly reported rising demand for short-notice charters directly related to the outbreak. Several of these have involved prospective customers wanting to evacuate groups of people. The company said requests have been coming from clients who have previously flown only by airline, including a decontamination team needing to travel within Asia and a Hong Kong-based family wanting to fly to the Indonesian resort of Bali.

“But any short-term gain is obviously balanced with longer-term concerns and challenges, including the impact on the economy,” PrivateFly CEO Adam Twidell told AIN. “Even now, while we’re seeing short-term additional demand, other clients are changing or canceling their travel plans. And obviously the operational logistics of flying in or out of China, and between countries, is now highly complex, with low availability of aircraft and crews making it difficult to fulfill requests. It’s a fluid situation, which we are monitoring closely.”

Charter operator Luxaviation said it has been implementing government guidelines to protect its staff from virus infection. In the first instance, this involves being clear as to whether passengers have visited any areas with reported cases of COVID-19 or have symptoms of the virus.

“The agreed protocol is that if a member of our crew suspects somebody on their aircraft is ill, the captain is required to report the case to air traffic control,” explained Luxaviation UK managing director George Galanopoulos. “We will further advise the destination station that specific cleaning and disinfection procedures might be required by local public health authorities. Some airports are now requiring automatic reporting about the presence or absence of any suspected cases before landing, for flights or connecting passengers originating from China.”

Flight support group Shepherd Aero said it has been dealing with multiple complexities in trying to meet its clients’ needs and that in some cases trips have been canceled. For instance, a China-registered HondaJet was due to deliver to Wuhan (where the virus first started spreading), but the aircraft is now stranded in the U.S. Another transpacific ferry flight involving a fuel stop in Micronesia was disrupted after local officials insisted that the crew first make a 14-day quarantine stop in Guam.

David Dixon, president of aircraft transactions specialist Jetcraft Asia, indicated that the full impact of COVID-19 is already set to be more far-reaching than that of the SARS virus epidemic in 2002 and 2003. He explained that this is mainly due to the far stronger connections between China and the rest of the world economy, which means a greater impact in terms of disruption to business and personal travel plans and also problems with the global supply chain for many industries, including aviation.

“If SARS is a pointer to the impact on business aircraft sales there were, in my experience, some buyers who were unconvinced that they needed or wanted a private aircraft until the health threat changed everything,” Dixon told AIN. “I sold a few arising from this problem. In that sense, it might not be all bad.”