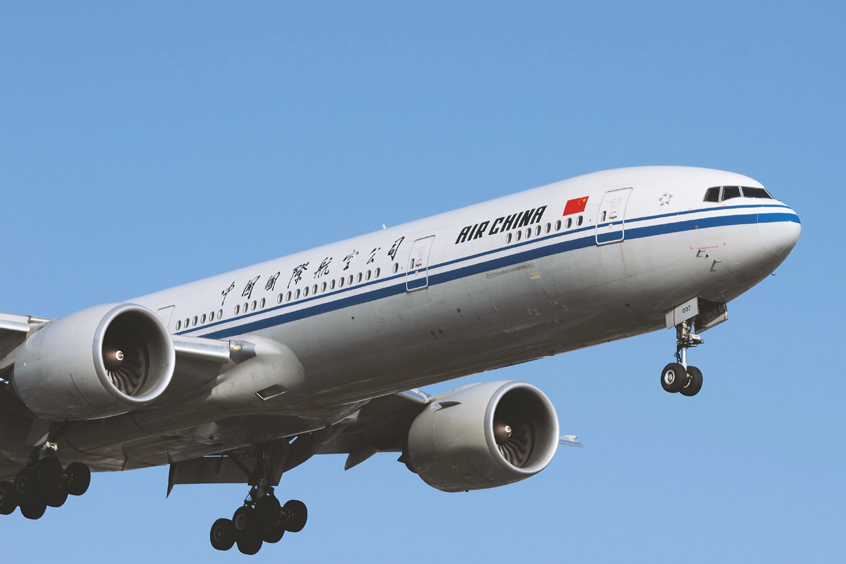 Group revenue for the year fell marginally — at about 0.4% — to CNY136 billion, led by a drop in air traffic revenue, but this was offset by increases in operating revenue.

By geographic region, the Air China Group saw increases in revenue from most of Asia, except Hong Kong, Macau and Taiwan. Revenue slipped for Europe and North America.

Expenses fell 0.74% to about CNY126 billion, on the back of drops in jet fuel costs and MRO costs.
Attributable net profit came in at CNY6.42 billion, a drop of 12.7% year-on-year.

For the year, the Air China Group, which includes Shenzhen Airlines, Air Macau and Dalian Airlines, carried 115 million passengers, a 4.8% increase compared to the previous year.

As at 31 December 2019, the group’s cash and cash equivalents stood at CNY8.9 billion, higher than the CNY6.8 billion it started the year with.

The Air China group ended the year with 694 passenger aircraft. This year, it is looking to introduce 37 new aircraft, including the Comac ARJ21 regional jet, which it ordered last year.

More significantly, the group is not looking to take delivery of any Boeing 737 Max aircraft in the next three years. Air China has 12 737 Max 8s on order, while subsidiary Shenzhen Airlines has 10. Both carriers have 737 Maxs in storage at the moment, as they are the subject of a worldwide grounding following two fatal crashes.

Comair agreed a deal with sellers Sundrops Investments, Smashing Star Investments and Marcel Liebenberg last summer for the acquisition. Comair was to pay R75 million ($5.1 million) plus a profit-share payment, capped at R250 million, for the acquisition. The deal also included the option of a one-off R150 million settlement payment.
But in a brief stock market statement today, Comair says: ”Shareholders are now advised that with effect from 31 March 2020, the parties by mutual consent, agreed to terminate the agreement, such that the agreement shall cease to have any further force or effect.”

While no reason has been specified for the deal being abandoned, the airline has been dealing with the impact of the coronavirus crisis on top of a series of existing challenges.

Comair, which operates flights as a British Airways franchise carrier and under the Kulula low-cost brand, has suspended all flights until 19 April during South Africa’s national lockdown. It last month said that for the ”foreseeable future the primary focus will be on restructuring the balance sheet as well as cash preservation”.
Even before the coronavirus crisis, Comair had been dealing with challenges including a difficult economic environment, the grounding of the Boeing 737 Max and additional costs while it transitions to a new maintenance firm.

“Our results for the first half of the 2020 financial year showed that although our revenue grew at 3% during the six months, we could not sustain the additional costs of 14% resulting from some under-performing investments and significantly higher fleet and maintenance costs which severely impacted the company’s profitability,” said Comair chief executive Wrenelle Stander in a trading update on 23 March.

“While the decision to renew our fleet was the right one at the time, the pace of renewal in an underperforming economy placed a burden on operating costs and profitability. In 2019 alone we took delivery of five additional Boeing 737-800 leases, as well as a new Boeing 737 Max 8 aircraft.”

The grounding of the Max added costs through the wet-lease of aircraft to replace three of the type, as well as through $45 million in cash being locked-up in pre-delivery and interest payments related to the acquisition.
Meanwhile, the transfer of maintenance from SAA Technical to Lufthansa Technik, while progressing as planned, means that the airline will be paying for two providers until at least end June 2021.

“Despite our efforts over the last few months to preserve cash, maintain liquidity; divestment from non-performing acquisitions; aggressive cost reduction across the group; taking back control of the fleet; and unlocking further operational efficiencies, more remains to be done,” says Stander.

Comair on 23 March initiated a formal labour restructuring process as part of further efforts to reduce its costs.