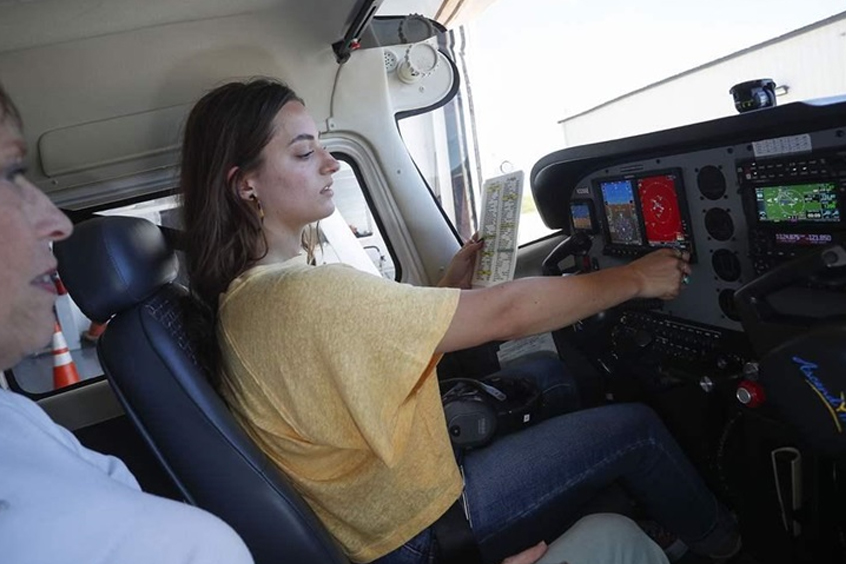 Flight training providers face special challenges in implementing methods for providing a safe environment for learning in the confines of an aircraft cockpit.

With checklists and protocols already standard operating procedure in aviation, incorporating beefed-up aircraft-disinfecting measures has quickly been woven into the routine—as several large flight training organizations report with recent moves to reduce the risk of coronavirus exposure for their students and flight instructors.

Batavia, Ohio-based Sporty’s Academy announced that it “remains open with enhanced procedures” for the use of company aircraft and aviation training devices.

The school made its customers aware that “cleaning and disinfecting supplies are maintained at the dispatch desk.” When an aircraft or ATD is dispatched, customers should expect a disinfecting wipe and a screen wipe to be issued along with the keys. “Disinfecting wipes may be used to clean major surfaces, controls, and knobs that may be touched during the flight,” it said, adding that only certain approved screen cleaners should be used on avionics.
“It is up to the client and the instructor to determine the flight deck surfaces to wipe down prior to their flight,” the advisory noted. After the flight, those individuals “must ensure that all trash is removed from the airplane as is our normal practice.”

Embry-Riddle Aeronautical University, with main campuses in Daytona Beach, Florida, and Prescott, Arizona, reported ramping up its “already stringent health precautions through intensive communication, disinfection protocols and temperature checks for all students, faculty, staff and visitors” to prevent the spread of coronavirus on its campuses and in the communities where they are located.

Although the resumption of classes at the university March 18 after spring break was to take place mostly online at least through April 6, students in flight training and aviation maintenance programs “with federal requirements for in-person instruction” had the option to continue studying on the main campuses after passing screening and consenting “to follow all prevention protocols.”

“Educational equipment, including aircraft, must undergo frequent disinfection,” Embry-Riddle said in March in a message. “We have increased the availability of hand sanitizers, and to promote good hand hygiene, we have launched a communication campaign on both campuses.”

Flight training continued at California Aeronautical University, which posted notice that it had evaluated potential threats, “and there are none at this time. Moreover, we have been proactive in educating our students and staff in reference to healthy protective measures and will expend every effort to continue to do our part in the protection of public health and follow appropriate guidance as necessary from the CDC.” The school, based in Bakersfield, noted that Flight Training Center students were using distance education resources for classroom instruction. “Due to the nature of flight instruction and the need for students to continue their progress, the flight department will remain operational with enhanced health precautions until further notice,” it said in an online update. Safety measures in effect included “regular disinfection of facilities, aircraft and equipment.”
American Flyers, a flight school with locations in states in the Northeast, South, and Southwest, noted in an emailed advisory that it is closely monitoring coronavirus developments and is “following guidelines from the government and relevant health authorities.” Its measures include “practicing extra caution” with sanitary procedures on its premises such as frequent cleaning of “common touchable surfaces such as countertops, doorknobs, computer screens, keyboards and other surfaces.”

In aircraft, commonly touched surfaces are being sanitized by fueling and maintenance personnel, and “we are encouraging all students to bring their own flight supplies, especially headsets, during this time.” Headsets provided by the school would be sanitized before and after use.

“American Flyers is certain that we will all persevere during this health crisis, and the key to that is to support one another,” it added.

A flight school and FBO in southern Maine, an area where coronavirus infections began to be confirmed in early March, concluded on March 17 that it was time to shut down instruction and aircraft rentals for the time being. Southern Maine Aviation emailed its customers that “the most important thing we can do at this time is spend the next few weeks laying low. We need to beat this virus and to do that we need to slow down the rate at which it is spreading. We need to isolate ourselves as much as possible, which the CDC recommends.” The school’s interim plan to staff with a skeleton crew for three weeks to refuel aircraft and answer phones would be regularly re-evaluated, said the message from Mark Damuth, the general manager.