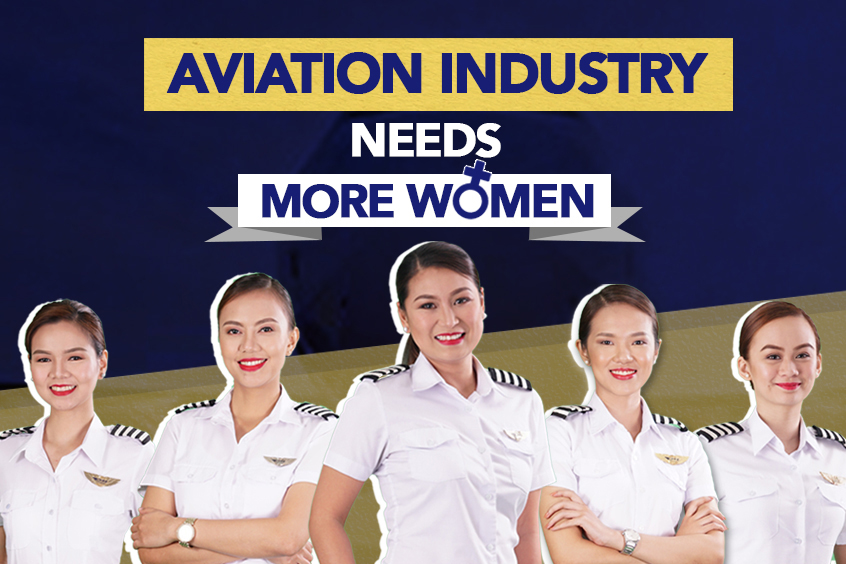 The aviation industry faces a worldwide shortage of qualified pilots. Numerous agencies cite the need to hire thousands of new pilots over the next two decades. In fact, some air carriers are already reducing or canceling flight schedules as a result of these pilot shortages.

Given this need to hire new pilots, the industry has recognized that it needs to tap the entire potential talent pool; employers are actively seeking pilots from historically under-represented demographics. One of these under-represented demographics is female pilots, who currently make up only about 6% of commercial pilots, according to the Air Line Pilots Association. This is partly due to the historical pipeline of military pilots, where for many decades female pilots were not allowed to participate. Dr. Rebecca Lutte, an assistant professor of Aviation as the University of Nebraska at Omaha (UNO), pointed out that, “In an age where pilot supply is a global challenge, recruiting women and underrepresented groups to the cockpit is an essential part of the solution.”

It’s astonishing to think that some members of our society might actually oppose hiring more female pilots. As Dr. Victoria Dunbar, an associate professor of Aviation at the Florida Institute of Technology, noted, “There is no particular skill set that a pilot needs that’s based on their gender. Aircraft are designed to be flown with light hand controls, so it’s not an issue of strength. I believe that men and women are equally capable of being good, safe pilots.”
Misogyny is real, and it affects not only the way men think about women pilots, but also the way women think about the career opportunities available to them.

Too many young women might think, “I didn’t even know, as a female, you could be a pilot. I thought that was a man’s job.” If young women can’t see it – through role models in industry, or in their own minds – they’re less likely to be it someday. They need to see more examples of successful women throughout the aviation industry – flying aircraft, working on airplanes as aviation maintenance technicians, and leading global airline operations from the C suite.
Even Capt. Tammie Jo Shults, the former fighter jet pilot who was hailed as a hero last year after safely landing a badly damaged Southwest Airlines plane, has reported that she has faced sexism as she pursued a career in aviation. Some passengers who were exiting the SW 1380 aircraft were reportedly surprised to learn they had a female pilot. Perhaps they thought that such a dangerous activity would not be suitable for a female pilot.

Sexist comments – explicit or implicit – may be spoken out loud or posted to social media and websites where anonymous bigotry thrives. Such attitudes are, sadly, widespread in our society, and female pilots are constantly subjected to them. Even worse, negative comments about female aviators are not limited to the general public, but may at times take root among male aviation professionals, including even within the education field.

This bias against female pilots is not new. Bessie Colman, the first African-American and Native-American pilot, had to learn how to fly in France due to discrimination at home.

These biases are not limited to the United States. Female pilots from many countries report difficulties adjusting to the male-dominated culture of aviation. While conditions sometimes improve over time, females continue to face challenges across the world. Studies show that female pilots are more negatively judged for their errors, are disparaged as being unable to take criticism from flight instructors, and are required to conform to certain cultural ideas and employment policies (particularly related to maternity leave) that are male-friendly. Although many male pilots whole-heartedly support their female peers, sexist comments by some have been widely reported.

A study in 2017 by researchers at Embry-Riddle Aeronautical University found that survey respondents were generally less willing to fly with female pilots compared to their male counterparts. Participants were presented with one of the following flight deck configurations: 1) two male pilots, 2) one male and one female pilot, 3) two female pilots, or 4) a fully autonomous cockpit (no humans). Willingness-to-fly scores for the two-female configuration were second to last—just above the fully autonomous flight. In other words, the public, which has consistently said that they do not want to fly in a pilotless airplane, feels that having two female pilots is not much better. Surprisingly, this effect was also seen for female participants. These findings were replicated by researchers in India.

In another study conducted as a collaboration between the Embry-Riddle Human Factors and Neurobiology Department (Nadine Ragbir, MS; lead author) and the College of Aviation (Dr. Scott Winter), researchers showed pictures of male and female licensed pilots—in uniform—to participants (about half of whom were licensed pilots) and asked them to rate the pilots’ abilities. In a follow-up study, they showed pictures of male and female non-uniformed potential student pilots to participants and asked similar questions. Respondents rated both Caucasian and African-American male pilots significantly higher, compared to female pilots.

In the second study, the differences were even more striking, as participants rated potential flight students with the same bias. Participants not only rated the males higher, but they did so more quickly, with significantly faster response times. There were no significant differences between the responses of male and female participants, or between pilots and non-pilots.

In a different study at Embry-Riddle, 400 parents across the United States were asked how they would feel about their children becoming commercial pilots. When asked how willing they would be to help their child get through flight school, parents expressed more willingness for sons compared to daughters. Surprisingly, this was particularly pronounced for mothers. Mothers also indicated that they would feel more confident about their son’s success, and would provide more emotional and financial support for their sons compared to their daughters.

Industry, universities and flight schools are taking several avenues to address this bias and inequality in aviation. One of them is educating the public, and particularly younger girls who might consider becoming a pilot. Many universities, including Embry-Riddle, host day events and summer flight exploration camps where they invite middle- and high-school girls to visit the campus and go on introductory flights. Nikki O’Toole, assistant professor of Aeronautical Science at Embry-Riddle, describes these flights as eye-openers for girls who might not otherwise get the piloting bug. “Many of them have never been in a cockpit, and some of them have never even been in an airplane,” she said. “Our goal is to show them that they can do this. It’s not something that should be out of reach for them.” According to Prof. O’Toole, about 10-15% of these girls are interested in flying. The key is to get them sold on the feasibility of attaining their dreams.

Successful men in aviation, not just women, can play an important role in letting young women know they can become fully capable aviators. Dr. Carolina Anderson, an Embry-Riddle faculty member who was the first woman ever to receive a Ph.D. in Aviation, has said that she was encouraged by her late father, a pilot for Avianca in Colombia. At age 14, she flew gliders. She soloed at age 16, towed by her father in a Super Cub. Today, Dr. Anderson has more than 4,000 hours of flight time and she holds Airline Transport Pilot and commercial pilot certificates in single-engine, multi-engine, instrument airplanes, gliders and seaplanes. She also has more than 3,500 hours of flight instruction, and she’s sharing her love of aviation with young people, including her two young daughters.

Educational outreach program needs to target not only girls, but also their school counselors at the middle- and high-school level. “Career awareness for young women is crucial and is an important element of youth outreach,” said Dr. Lutte of UNO. Instead of telling girls that they should seek traditional female-oriented degrees in humanities or social sciences, high-school counselors should provide them with information on aviation and other STEM programs, too.

They should also point out that history is full of great female pilots, such as the WACS and test pilots in WWII. They should also be informed about the physical requirements of aviation, what piloting life is like, how it might affect their family life and more. Being a commercial pilot often means many days and nights away from home each month. This type of information is vital for someone making career decisions. Importantly, it should not be used to scare off potential student pilots.

Another potential solution is to offer scholarships designed for women. Tuition and flight fees are burdensome for any potential pilot, and these scholarships provide a critical opportunity for low- and middle-income women to achieve their goals. Many universities have endowments or other earmarked money for this very purpose. On March 7, 2019, Boeing announced that they would set aside $3 million for ERAU scholarships seeking to increase underrepresented populations in the aviation workforce, with the goal of assisting female, minority and veteran students in pursuing a pilot’s license or a certificate in aviation maintenance.

There are many clubs, groups, chapters and other organizations designed for women in aviation as well. Some of these exist online in Facebook or Instagram forums. Others are located at flight schools and universities, including Embry-Riddle, or even national programs with yearly conferences. Dr. Lutte noted that, “There are several excellent youth outreach programs targeted specifically towards young women. One that has been identified as a best practice is Women in Aviation, International: Girls in Aviation Day.”

Dr. Dunbar agreed: “There are several organizations that are attempting to reduce the stereotype by promoting women in aviation, including WAI (Women in Aviation International), EAA (Experimental Aircraft Association), AOPA (Aircraft Owner and Pilots Association), Institute for Women of Aviation Worldwide, and others. They have national and international campaigns aimed at increasing awareness of women in aviation.” Women can find like-minded companions in these venues. They can share their successes and frustrations with colleagues who understand what they might be going through.

How long will it take for significant change to take place? Nikki O’Toole believes that it will take some time, much as it did within the medical field. “It can be a long, slow process,” she said. “The goal is to get more female pilots in cockpits. Then the public will eventually see that this is the norm. Once it is the norm, then everything else will follow. The good news is that the airlines and flight schools are on board.”

Once the public comes to accept that female pilots are no different from male pilots, our society will have made the paradigm shift. And, perhaps we will see more children’s books with female pilots in the pictures.

I suppose we should not be terribly surprised that this bias exists in aviation. It exists across far too many fields, from medicine and engineering, to law and computer science. Those of us in the aviation field have an obligation to help address this problem, however, not only because we need more pilots for the industry, but because bigotry should have no place in our society.