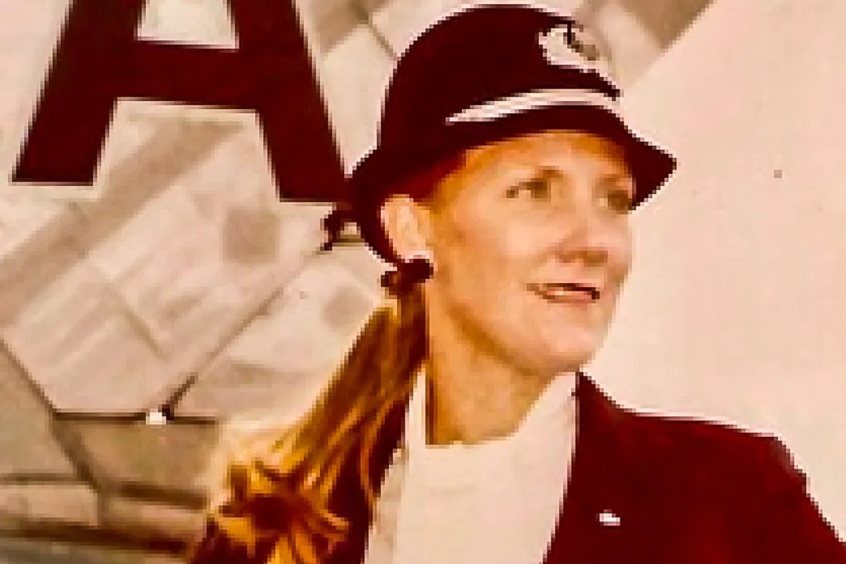 “Being told ‘No’ always makes me want to push my limits more,” Beverley Bass, 67, mused from her home in Pine Island, Florida.

Bev, who was the third woman to be hired as a pilot for American Airlines, is no stranger to the word “No.” Yet we know her name today because she never let rejection get in her way.

Recently, Bev received the Hero Award at the 2019 TPG Awards in recognition of her leadership for women in commercial aviation. Among other career highlights, Bev, the first female captain for American Airlines, is best known for safely diverting a planeload of passengers to Gander, Newfoundland, on Sept. 11 — which later became the basis for Broadway musical Come from Away.

“Don’t tell me I cannot do something, because I’m going to prove you wrong,” Bev told TPG. “I’ve always been that way.” She was raised in Ft. Myers, Florida, and would often go hunting on horseback with her father in the Everglades, and then to fashion shows with her mother. She wanted to start taking flying lessons when she turned 16, but her parents would not agree to it as they wanted to keep her interest in the family’s quarter horse operation.

But her parents also didn’t believe in setting limitations for their daughter. Although her family wouldn’t allow her to fly while she lived at home, they finally caved when Bev came home after her freshman year at Texas Christian University. So she began taking lessons at Page Field in Fort Myers.

“I came home after my first lesson and told them that this was what I was going to do for the rest of my life,” Bev said. And she meant it, even though there were many moments where her declaration sounded like it would fall flat.

Bev attributes her successes to her stubbornness and relentless drive to excel in her own way. “I just feel like I was always into being the best of whatever I was working on,” Bev told TPG. “Even in the third grade, we had a contest, and you had to color a picture, and whomever won that contest got to see Swiss Family Robinson for free. And what do you know? I won that contest. I always wanted to be the best at anything that I did.”

Bev’s determination was bred from the beginning. “We showed horses for 10 years,” Bev said of her early days, “and we always had to be the first ones at the facility at 4:45, 5 a.m. The gates wouldn’t even be open yet. My father always said, ‘It doesn’t pay to be second,’ and I keep hearing those words.”

That ambition paid off for Bev when it came to her career aspirations in aviation. “With my parents, the way I was raised, I didn’t know there was any such thing as gender discrimination,” she told TPG. “I didn’t know there were ‘boy jobs’ and ‘girl jobs’ growing up. So when I wanted to be an airline pilot and there weren’t any women airline pilots, that didn’t deter me. I just thought, ‘OK, it doesn’t matter: I just have to get my qualifications, as qualified as a guy, and of course [the airlines] will hire me.’”

“October 24, 1976,” Bev told TPG of her hiring date with American Airlines “It’s a date you never forget: The one you begin as a pilot for an airline.” But her path leading up to her interview process was a turbulent one.

Between college and her start date with American, Bev held several aviation jobs, including serving as the chief pilot of a charter department; for her very first job in the industry, Bev transported a young woman’s body to Arkansas on behalf of a local mortician.

And for the final six months of her early career leading up to her American interview, Bev literally put her life on the line five nights a week, transporting miscellaneous cargo such as canceled checks for banks, foto-mat film or airplane parts in and out of Dallas Love Field Airport.

So to build up her resume, Bev maneuvered twin-engine Aztecs, Barrons and Navajos through “Thunderstorm Alley” between Texas, Oklahoma and Kansas — a region known for its sudden, violent storms, tornadoes and other dangerous weather. The planes were old and poorly maintained, and she did it all without radar to help her navigate the treacherous darkness.

“A lot of freight airplanes are not maintained as well as passenger airplanes, and we would fly them with inoperative components, no radar — it was tough flying,” Bev said. “We would never fly a passenger plane like that. But it’s what many of us do to build our flight hours [in order] to get hired by the airline. You put yourself through some of these obstacles to look good on your resume, if you will.”

And even though she was offered an interview, the hiring process was far from over. “The most grueling part was the physical,” Bev said. “We used to have a saying that you could pass the astronaut physical and [still] be pronounced ‘dead’ at American.”

The medical part was so stringent that most people who didn’t get through the pilot application process were eliminated because of the medical. “For one or two days, every single thing on you was tested: Your eyes, heart, lung strength, hearing, psychological testing. You had to have 20/20, uncorrected vision. You had to be at least five feet, six inches if you wanted to be hired back in the day.”

And the grand finale of the hiring process took place around a large conference table. “There were five big pilot chiefs firing questions at you one by one,” Bev said. “And then you had to fly a simulator.”

Bev attributes her success to her dedication to her craft, but also credits a few other factors for her groundbreaking hire as the third female pilot for AA in 1976, and eventually rising to the ranks of becoming the first female captain for American Airlines in 1986.

These days, Bev still takes to the air, but in the private sector: She is the co-pilot on a jet for an 83-year-old woman named Mo Anderson, who is “so tickled to have a pilot who is a woman.” Bev has also written a children’s book, Me and the Sky, to give children the opportunity to see that they can become anything they want to be.