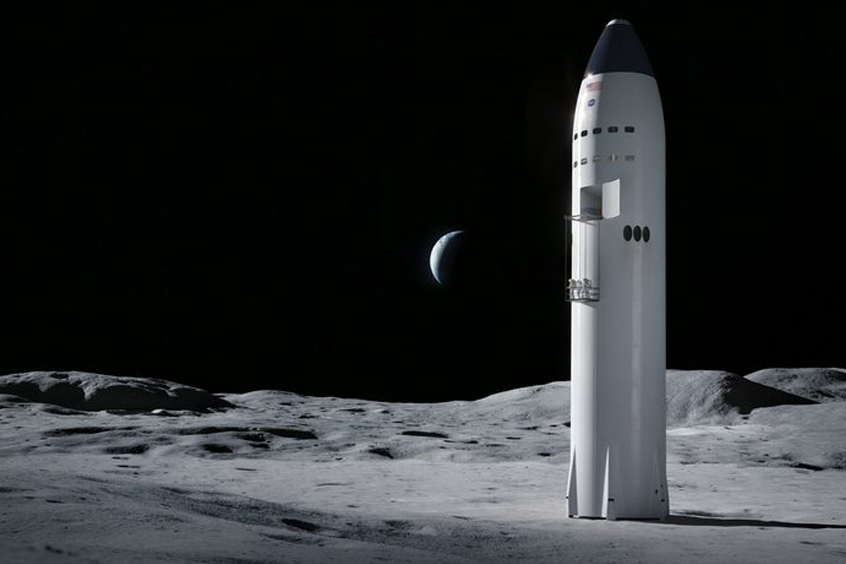 NASA announced in April that it has selected three companies to begin work on designs for human lunar landers, one of which the agency still hopes will be ready to land humans on the moon by the end of 2024.

NASA selected teams led by Blue Origin, Dynetics and SpaceX for 10-month study contracts for the Human Landing System (HLS) program. The combined value of the awards is $967 million.

“Let’s make no mistake about it: We are now on our way,” Doug Loverro, NASA associate administrator for human exploration and operations, said in a media teleconference to announce the awards, saying it completed NASA plans under the Artemis program to return humans to the moon. “There are no more puzzle pieces to add. We’ve got all the pieces we need.”

The largest award went to the team led by Blue Origin, which received $579 million. That so-called ‘national team,’ announced in October, includes Draper, Lockheed Martin and Northrop Grumman. Blue Origin will develop the descent module, based on its Blue Moon lander design, while Lockheed provides the ascent module, Northrop builds the transfer stage, and Draper develops avionics and related systems.

A team led by Dynetics with more than 25 subcontractors received $253 million. Dynetics announced in January it had bid on the HLS program, with Sierra Nevada Corporation as one of its partners. The Dynetics design features a single module capable of both descending to the surface and ascending back to orbit.

SpaceX received the third HLS award, valued at $135 million. SpaceX is offering its Starship vehicle for lunar landings, which would be launched on its Super Heavy booster and fueled in Earth orbit by other Starship vehicles before departing for the moon. SpaceX had not announced its intent to bid on the program, declining to answer questions about it in the past, although the company was widely rumored to have submitted a bid.

The three winning bidders will begin work with NASA to refine their concepts, including defining requirements for each lander. “We’re going to spend the first three months understanding the awardees’ designs,” said Lisa Watson-Morgan, NASA’s HLS program manager. “This is far more than just studies. It’s going to encompass deep design, development, long-lead procurements for each of the awardees.”

That work will lead to a level of maturity for each design equivalent to a preliminary design review. NASA plans to conduct a “continuation review” by the end of the 10-month studies, she said, “so we know, quickly, who we think has the best shot of making 2024.”

The lander most likely to be ready for a 2024 landing will go forward, but NASA suggested one or both of the other companies could be retained to develop landers better suited for later missions where NASA has emphasized sustainability.

Bridenstine added that NASA was not formally taking the Gateway “off the table” for that initial 2024 mission, and that the Gateway is “critically important” for later phases of lunar exploration.

None of the three companies proposed using the Space Launch System for their lunar landers. Blue Origin said their lander can launch either on its own New Glenn vehicle or United Launch Alliance’s Vulcan, while Dynetics has baselined Vulcan and SpaceX its own Super Heavy booster for Starship. Bridenstine said SLS will still be used for launching the crewed Orion spacecraft to lunar orbit, where it will dock with the Gateway or directly with the selected lander.

NASA said its budget proposal released in February was sufficient to fund development of the HLS lander systems, along with the rest of the Artemis architecture needed for a 2024 landing. Bridenstine said he met with members of Congress of both parties in recent days about the upcoming HLS awards and found broad support for the effort.

“They have all been very supportive of the effort to get to the moon,” he said. “We have a budget request that reflects that budget priority and I have not heard anybody suggest that, because of the coronavirus pandemic, we’re going to have to cut NASA.”

It’s unclear, though, when and how Congress will act on that budget request, or if NASA will spend much or all of the 2021 fiscal year on a continuing resolution that would fund the agency at 2020 levels and deprive it of the additional funding needed for Artemis.

Bridenstine did note that, if Congress does take up a new stimulus spending package focused on infrastructure as part of its response to the pandemic, he hopes that NASA will be a part of that bill.

Notably absent from the winners was Boeing, which announced in November it had proposed a lunar lander system that could be launched in one piece on the SLS. NASA officials on the call declined to state why Boeing was not selected, or if it had received other proposals, saying that would be included a source selection statement.

That source selection statement, posted on a procurement site April 30, confirmed Boeing submitted a proposal — along with another, previously unknown company, Vivace — but offered no explanation of why it was not selected.

“While Boeing is disappointed not to have been selected for HLS, we remain focused on delivering our elements of NASA’s Space Launch System, the rocket that will take Americans to the Moon and Mars,” Boeing spokesman Jerry Drelling said in a statement to SpaceNews.