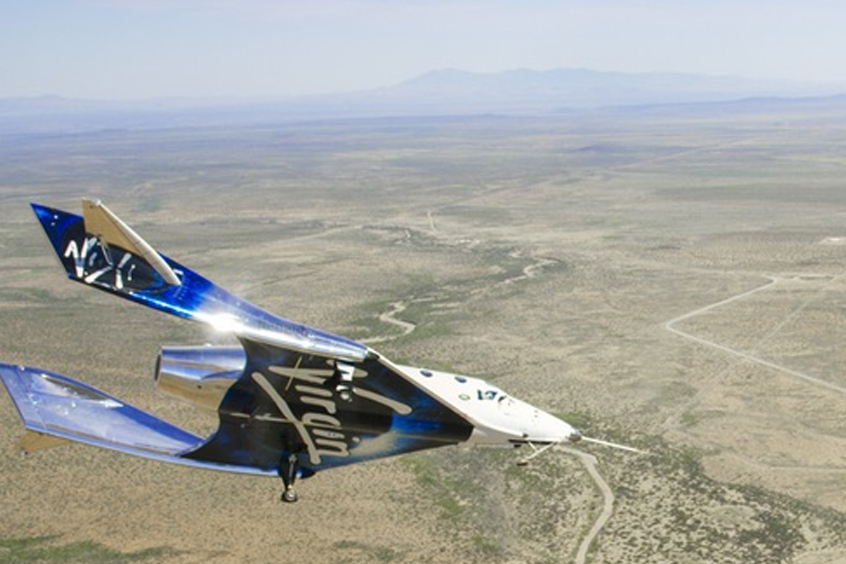 Virgin Galactic conducted the first test flight of SpaceShipTwo from its New Mexico spaceport recently as the company edges closer to finally beginning commercial flights of the suborbital spaceplane.

The company’s WhiteKnightTwo aircraft, with the VSS Unity SpaceShipTwo attached to it, took off shortly before 11 a.m. Eastern from Spaceport America in southern New Mexico. After reaching a planned altitude of about 15,000 meters, WhiteKnightTwo released SpaceShipTwo, which glided back to the runway at the spaceport.

While SpaceShipTwo has performed many glide flights, all previously took place from Mojave Air and Space Port in California. SpaceShipTwo arrived with WhiteKnightTwo at Spaceport America in February to begin a final series of glide and powered test flights before starting commercial operations.

Pilots Dave Mackay and CJ Sturckow performed maneuvers during the glide test to compare the vehicle’s performance against earlier tests. They and the rest of the flight team also used the flight to familiarize themselves with operations in the New Mexico airspace.

“I’d like to congratulate our team for reaching this flight milestone, especially during these challenging times,” George Whitesides, chief executive of Virgin Galactic, said in a statement after the test.

The company said it had instituted ‘stringent operational protocols’ in response to the coronavirus pandemic. “Spaceport America and Virgin Galactic have adhered to new guidelines set by [New Mexico] Gov. Michelle Lujan Grisham to include social distancing and wearing masks,” Dan Hicks, executive director of the New Mexico Spaceport Authority, said in the statement.

Virgin said it would start preparations for the next test immediately, starting with a review of the data collected from this flight. It did not state when that test flight would take place, or if it would be another glide flight or a powered test flight.

The company also didn’t update its plans for beginning commercial suborbital flights with SpaceShipTwo. In presentations last year, as the company was completing its merger with publicly traded holding company Social Capital Hedosophia, the company estimated commercial flights would begin in mid-2020.