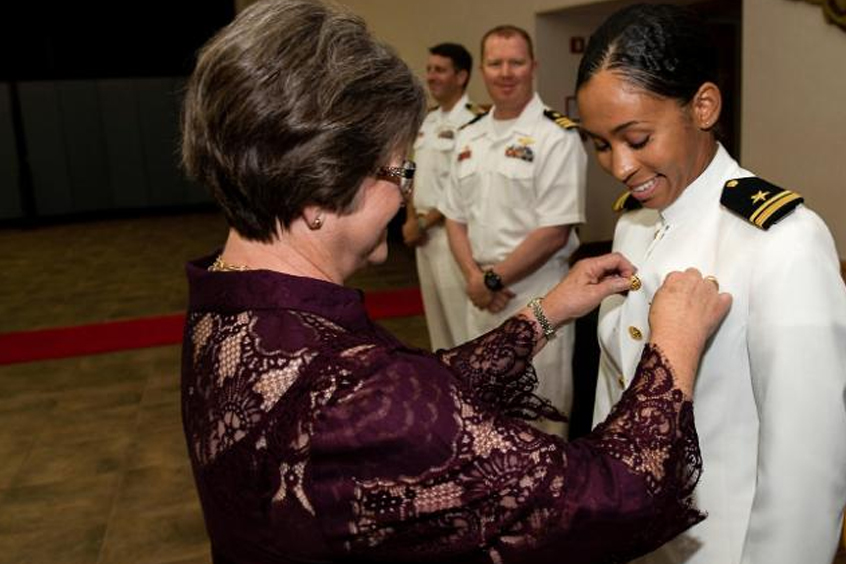 Swegle was named a naval aviator and awarded her gold naval aviator wings alongside 25 classmates during a small ceremony at Naval Air Station Kingsville in Texas, according to the Navy. Commanding Officer Cmdr. Matthew Maher presented ‘Wings of Gold’ to each of his graduates during the ceremony.

Instructors and students completed the training during the coronavirus pandemic by periodically sterilizing surfaces, wearing masks and social distancing when practical. Despite these challenges, the Navy graduated its largest class of strike aviators in almost a decade.

Swegle, a Virginia native who graduated from the US Naval Academy in 2017, became the Navy’s first Black female strike pilot after completing tactical strike training in July. A strike pilot flies the Navy’s strike aircraft, including fighter jets like the F/A-18 Super Hornet and the F-35C Joint Strike Fighter, or the EA-18G Growler electronic warfare aircraft.

She will now report to the ‘Vikings’ of Electronic Attack Squadron 129 at Naval Air Station Whidbey Island in Washington to begin training as an EA-18G Growler pilot. The squadron trains new naval aviators, naval flight officers and naval aircrew in electronic warfare tactics, techniques and procedures in preparation for their fleet assignments, according to the Navy.

Swegle’s groundbreaking accomplishment follows those of other women who have made history in the U.S. Navy, such as Rosemary Mariner, who became the first female jet pilot in 1974, and Brenda Robinson, the first Black woman to become a Navy flight instructor, evaluator and VIP transport pilot in the 1980s, according to the non-profit organization Women in Aviation International.