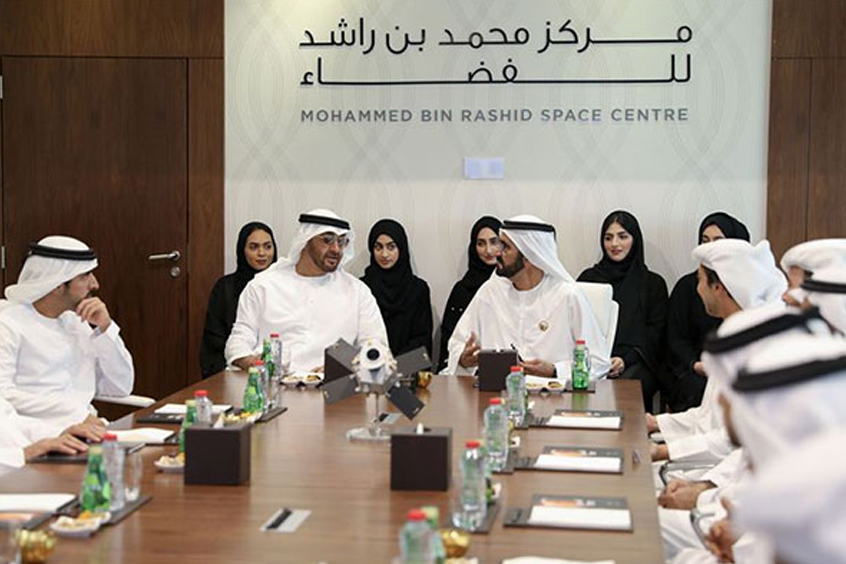 The system captures a matrix of individual digital images to create a single high-resolution picture of the UAE’s terrain. This imaging system by MBRSC will provide a comprehensive view of the UAE’s topography, using remote sensing systems, image processing, geographic information systems and artificial intelligence. While the service currently provides detailed high-resolution satellite image mosaic of Abu Dhabi and Dubai, mosaic of all Emirates will be released soon.

The system is part of the Mohammed Bin Rashid Space Center’s efforts to support federal and local government entities, research and academic institutions as well as the private sector to take advantage of this type of technology that plays an important role in understanding the geography, topography and environmental impacts of large areas in the UAE more accurately.

In view of the MBRSC’s efforts to spread knowledge, expand the use of space technologies owned by them and extend cooperation frameworks to all entities, “Mosaic” will be provided to all government and non-governmental entities free of charge for the purpose of benefiting the agencies and enhancing their role in the UAE society. This type of satellite imagery is relevant to stakeholders in infrastructure, urban planning, environment and climate change sectors, energy, education, technology, roads and transportation, among others in the UAE. Accordingly, MBRSC will provide high-resolution images from the “Mosaic” system, after conducting a comprehensive survey of the area requested by the entity, according to the nature of their activity.

Yousuf Hamad AlShaibani, director general, MBRSC, said, “The Mohammed Bin Rashid Space Center seeks to contribute effectively to the community through projects that support the development sectors in the UAE. Over the past few years, MBRSC has established itself as an efficient and leading space centre for the Middle East region, weighed in by the impact of its projects and technologies in non-space sectors as well. The launch of KhalifaSat’s first satellite image “Mosaic” is of strategic importance to support the infrastructure of all vital sectors in the UAE and promote strategic decisions by key stakeholders operating in the country.”

The Mohammed Bin Rashid Space Centre collects images of a specific geographic area through the KhalifaSat at specific intervals ranging from days or months. These images are then combined to form one single comprehensive image with a high visual resolution of up to 0.7 meters, in TIFF format, well-known for storing raster graphics images. This is in addition to the satellite’s 90 km land coverage. “Mosaic” differs from other satellite images as it has higher image resolution and clarity due to the use of Geo-referencing system and other modern technologies.

Explaining the methodology of the new imaging system, Ammar Saif AlMuhairi, Head of Image Processing Section, MBRSC, explained: “The “Mosaic imaging system at the Mohammed Bin Rashid Space Centre goes through systematic stages of image extraction. Firstly, individual images scattered over an area are taken by the satellite during a given period. The system then geo-assigns these images using a coordinate reference system to ensure the highest possible resolution. The image correction phase is followed by enhancing contrast and various corrections to make sure that all images are free of distortions. Finally, the colors of the satellite images are matched and blended, followed by the testing of the outcome by the relevant team, and ensuring its correctness before finally releasing it.”