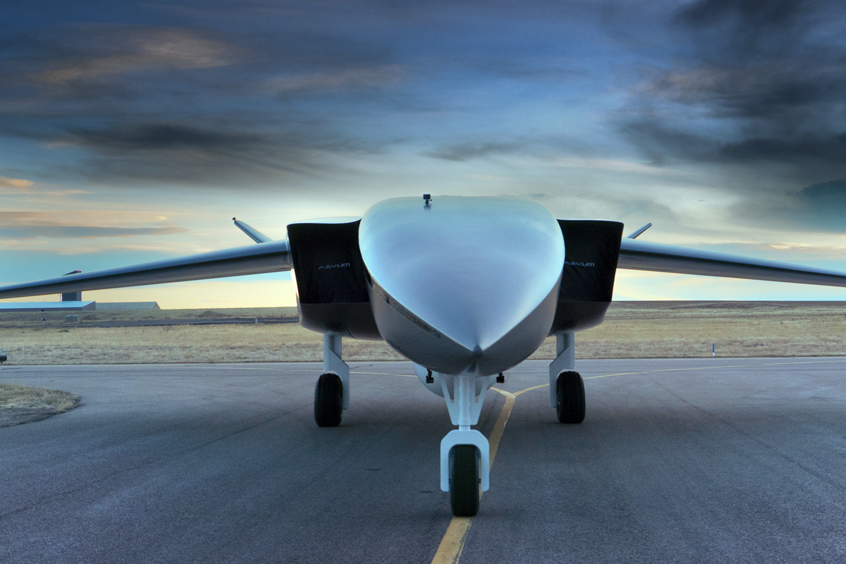 Air-launch startup Aevum recently unveiled Ravn X, the drone aircraft that will serve as the first stage of its smallsat launch system.

Aevum, a four-year-old company based in Huntsville, Alabama, is positioning Ravn X to compete in the increasingly crowded small launch market, promising fast-response service enabled by an autonomous aircraft that can take off from any mile-long runway.

The 55,000-pound unpiloted aircraft is 80 feet long with a 60-foot wingspan. While in flight it will release a two-stage rocket that can launch 100 kilograms to 500 kilograms of payload to low orbits. Skylus said Ravn X will be ready for operations within the next 18 months after it clears regulatory hurdles.

The next step will be to seek air-worthiness certification for the drone from the Federal Aviation Administration. The vehicle later will go to Cecil Spaceport in Jacksonville, Florida, for orbital launch testing.

“This is when we start putting our design through the wringer,” said Skylus. “It only gets harder from here,” he added. “The hardest part is always in the last 10 percent of any program.”

Getting through the regulatory challenges to fly an unmanned air vehicle that launches rockets will be tough, said Skylus. “But it’s necessary for the market we’re after.” The goal is to provide reliable service with minimal logistics footprint, he said. The vehicle uses jet fuel and the same equipment as airplanes.

“There’s no aircraft out there perfectly designed for small launch,” he said. “We needed a first stage. We chose a drone. Why risk a pilot?”

The aircraft’s long and lean shape was designed for speed, he said. “Our first stage is actually a first stage, not a carrier aircraft. Because we don’t have to worry about human pilot, we ignite half a second to 1 second on separation. This minimizes energy bleed.”

Skylus said autonomy and software-driven processes will help shorten the lead time of launches from years to months. “US leadership has identified the critical need for extremely fast access to low Earth orbit,” he said.

The company has not disclosed how much private funding it has raised. Skylus said some revenues already are being generated from government contracts.

Ravn X’s first launch will be a U.S. Space Force mission called Agile Small Launch Operational Normalizer, or ASLON-45. The $4.9 million contract the company got in September 2019 had been originally awarded to Vector Launch but Vector withdrew in the wake of financial difficulties so the job was reassigned to Aevum. The mission will fly from Cecil Spaceport.

Aevum is one of eight companies the Space Force selected to compete for launch contracts in the Orbital Services Program-4 — a $986 million procurement of launch services over nine years.  In addition, Skylus said, the company has received a Small Business Innovation Research contract from the US Air Force and a classified Pentagon contract.

The goal long term is to have about 85 percent of Aevum’s business come from commercial customers and 15 percent from defense and research agencies, Skylus said.

The business plan is based on conducting about eight to 10 launches a year at prices ranging from $5 million to $7 million a launch, he said. “We are offering reliability and schedule and for that we’re charging a premium, we’re not the cheapest.”