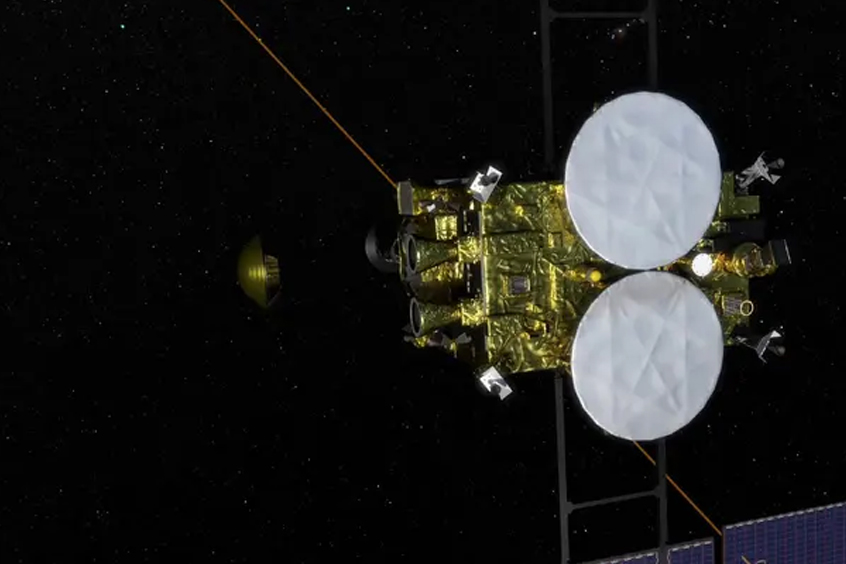 Japan’s Hayabusa2 mission delivered samples taken from a primitive asteroid to Earth Saturday, which could provide potential insights into the origin of life on Earth and evolution of the solar system.

The 40-centimeter-diameter, 16-kilogram Hayabusa2 reentry capsule containing samples from asteroid Ryugu made a visibly fiery entry into the atmosphere on Dec. 5, landing in Woomera Prohibited Area in south Australia just before 1:00 p.m. Eastern.

The event was tracked closely with the Japanese space agency JAXA providing live coverage. Recovery of the capsule began after sunrise at Woomera, with an initial search carried out via helicopter and guided by a beacon signal.

The capsule was successfully recovered at 2:47 pm Eastern, JAXA confirmed. The recovery operations follow the end of the main mission of Hayabusa2, a journey taking six years and more than 5 billion kilometers.

The capsule will first be assessed at a Quick Look Facility before transport to Japan where the capsule will eventually be opened. The samples will then undergo laboratory analysis in first vacuum then nitrogen conditions.

On Dec. 4 the mission return capsule had separated from Hayabusa2 at an altitude of about 220,000 kilometers, setting the stage for reentry and the main spacecraft to begin a new quest.

Hayabusa2 is the second time Japan has delivered asteroid material to Earth, and the success also comes amid a flurry of highly challenging and complex sample return missions.

At the time of reporting moon samples believed to be the youngest so far collected were in lunar orbit aboard a Chinese Chang’e-5 spacecraft ahead, while NASA’s OSIRIS-REx spacecraft in October secured material it collected from the asteroid Bennu.

Hayabusa2 launched on a Mitsubishi Heavy Industries’ H-IIA rocket in December 2014 and rendezvoused with its target Ryugu, carbonaceous asteroid, in June 2018. The spacecraft spent 18 months in the vicinity of the one-kilometer-diameter asteroid, mapping and investigating the composition, surface temperature and potential magnetic field of the celestial body, as well as deploying two rovers and a lander on the surface.

The material from Ryugu delivered by Hayabusa2 was collected in 2019 by two separate sampling activities using a meter-long sample horn.

A five-gram tantalum projectile was fired down the horn with a sample of material being delivered up the instrument, collecting a planned total sample mass of over 100 milligrams. The second sampling excavated pristine material from beneath the surface, where it would have been shielded from space weathering. The spacecraft departed for Earth in November 2019.

Ryugu belongs to a class of asteroids relatively unchanged since their creation during the early, formative years of the solar system. Ryugu is thought to be similar to meteorites that impacted with—and delivered water and organics to—the young Earth.

“The materials that formed the Earth, its oceans and life were present in the primordial cloud from which our solar system formed. In the early solar system, these materials were in contact and able to chemically interact within the same parent objects,” a JAXA mission overview states.

The German Aerospace Center, DLR, built the MASCOT lander for Hayabusa2 mission which touched down on asteroid Ryugu in October 2018. DLR and JAXA are now collaborating on a low-cost asteroid mission called Destiny+ and the Martian Moon Exploration mission (MMX), a medium-class mission to Phobos and Deimos. Both are set for launch in 2024.

With half of the xenon fuel for its ion engine remaining, the Hayabusa2 spacecraft is now headed back out into deep space to embark on an extended mission, using the visit to Earth to alter its orbit.

1998 KY26 was one of two candidate targets chosen through engineering considerations, certainty regarding their orbits and scientific criteria. Observations of yet another never-before visited body are expected to bring valuable comparisons and context for the discoveries from Ryugu.

With a diameter of 30 meters and rotation period of just over 10 minutes, the celestial body presents new challenges for rendezvous but provides the opportunity to view an asteroid surface on which centrifugal force dominates gravity.

Hayabusa2 is the follow-on to the successful, pioneering Hayabusa mission which launched in 2003 to sample asteroid Itokawa. It returned with the first asteroid samples in 2010 despite numerous technical difficulties.