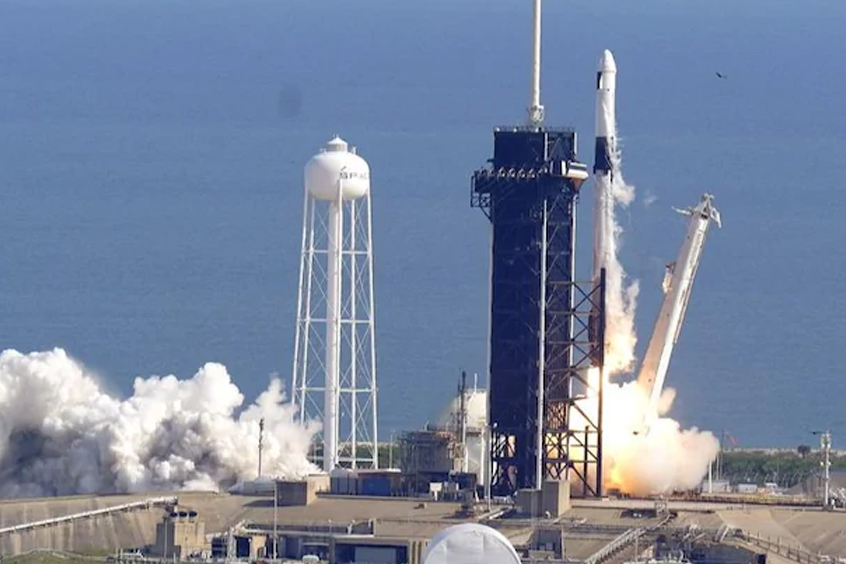 SpaceX recently launched the first of a new generation of Dragon cargo spacecraft, carrying experiments and supplies to the International Space Station.

The SpaceX Falcon 9 lifted off from Kennedy Space Center’s Launch Complex (LC) 39A after a one-day delay caused by weather. It deployed the Dragon cargo spacecraft nearly 12 minutes after liftoff. The rocket’s first stage, previously used for the Demo-2 commercial crew mission in May then for launches of the ANASIS-2 satellite and a set of Starlink satellites, landed on a droneship in the Atlantic Ocean.

The Dragon, flying a mission designated CRS-21, is carrying 2,972 kilograms of cargo, both within the spacecraft itself and in its external trunk.

CRS-21 is the first mission in SpaceX’s Commercial Resupply Services 2 contract, which uses a version of the Crew Dragon spacecraft developed for the commercial crew program. “What you see on the outside, the exterior, is the same outer mold line” between the crew and cargo versions, said Sarah Walker, director of Dragon mission management at SpaceX, at a Dec. 4 prelaunch briefing. The biggest difference, she noted, is the lack of SuperDraco abort thrusters on the cargo version.

The interior is redesigned to accommodate cargo, with about 20% more volume than the first-generation cargo Dragon. The spacecraft can host eight powered lockers for research payloads at launch and 12 for its return to Earth, compared to six such lockers on both launch and return for the earlier Dragon version. Dragon can support more lockers for return than at launch since it can use additional power that, at launch, is needed for external payloads.

Walker noted that the new Dragon can stay at the ISS for up to 75 days, twice as long as the original version, although for this mission it will be docked to the station for about 35 days. The spacecraft, which can dock directly with the station rather than being berthed by the station’s robotic arm, is designed to be used at least five times.

While original cargo Dragon missions launched from both LC-39A as well as nearby Space Launch Complex 40, Walker said SpaceX plans to use LC-39A for cargo Dragon missions in the future, taking advantage of the crew access arm there for loading time-sensitive cargo. “That is a huge advantage for us to be able to perform late-load cargo while the vehicle is already vertical,” she said. “It allows us to do it even closer to T-0.”

Like Crew Dragon, the new cargo Dragon will splash down just off the Florida coast, rather than in the Pacific hundreds of kilometers from California as the first-generation Dragon cargo spacecraft. That will enable some research payloads to be handed over to scientists as soon as four hours after splashdown. “It’s a really critical capability for biological payloads,” said Kirt Costello, chief scientist for the ISS program office at NASA, at the prelaunch briefing.

This Dragon is carrying a wide range of biological and other research payloads for the station. The experiments include studies of the effects of spaceflight on heart and brain cells, testing of an off-the-shelf blood analysis device, and a ‘biomining’ experiment that will examine how microbes could be used to extract resources from asteroids.

The largest payload on the spacecraft is the Bishop airlock for Nanoracks. The company built the airlock as a commercial facility for use deploying satellites and hosting external payloads. The station’s robotic arm will remove Bishop from Dragon’s trunk shortly after docking and install it on the Tranquility, or Node 3, module of the station.

Nanoracks decided to develop Bishop to get around a bottleneck in satellite deployments using an airlock in the Japanese Kibo module, but the potential applications of the airlock have grown over time. “We tried to make the airlock design flexible so that it can be used in a variety of different ways down the road,” said Brock Howe, program manager for Bishop at Nanoracks, during a November briefing about the mission that included several scientists also flying experiments on the Dragon. “Hopefully, the airlock will be able to provide them with capabilities that will enable them to be very creative going forward.”

“This is a monumental moment for Nanoracks,” Jeff Manber, chief executive of Nanoracks, said in a statement after launch. “We came up with this idea five years ago. In those five quick years, we’ve gone from being known as the ‘CubeSat’ deployment company to an organization that is building the future of commercial low Earth orbit infrastructure.”

The Dragon is also carrying several hundred kilograms of crew supplies, which includes some special items for the upcoming holidays, such as “some Christmas-y food,” said Kenny Todd, NASA ISS deputy program manager, at the prelaunch briefing. He declined, though, to say if there were any gifts on board. “I don’t like to get out in front of Santa Claus.”