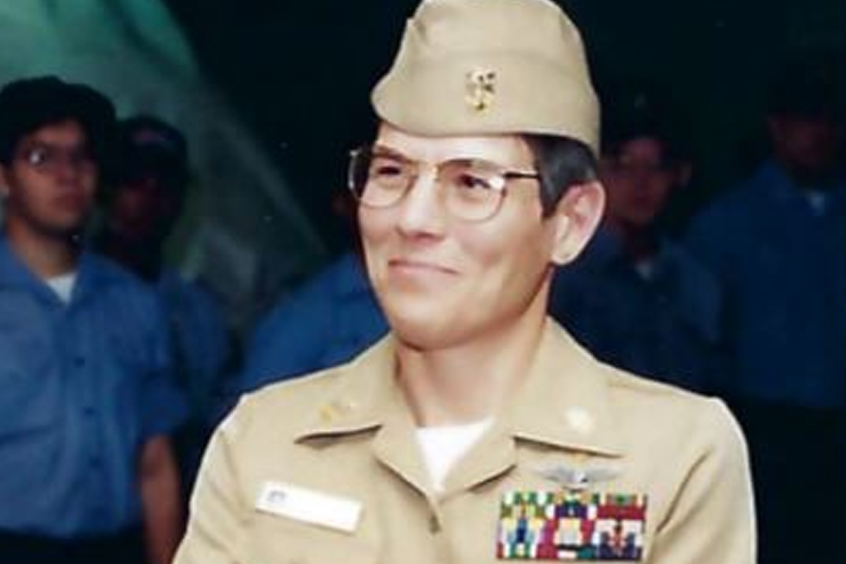 Robinson has been with Aurora Flight Services for the past 12 years and, before that, worked for about five years at Pratt & Whitney before moving over. Her job at Aurora, she said, continues to be exciting.

“I’m a quality program manager for Sikorsky Programs, which is one of our major customers. We build components for Sikorsky and the Marine Corps’ CH-53K helicopter. I’m responsible for the overall quality of the product that goes out the door, and that includes inspections.

“I do some inspections, process controls, interface with engineering for design because we do some of the design work for these components. I sit in on when they come up with new designs and put my two cents in on is it inspectable, is it buildable, that type of thing,” she said.

Robinson said she also interacts with customers when there are quality issues. If a mistake is made, she’s the one who investigates to see what happened and why.

Robinson’s interest in aviation first took flight when she was just a child. Her father was an aeronautical engineer who started out as a craftsman for Boeing.

“His background in aviation sort of drove me to aviation. I was sort of always been interested in the military, and in 1971 the aircraft industry tanked and my dad got caught up in a layoff. He ended up getting a government job working for the Navy. That’s where I got interested in the Navy thing because I had access to that type of information.

“I graduated (high school) and ended up enlisting in the Navy. My specialty was a jet engine mechanic, which that was supposed to be my main specialty, but I ended up being a helicopter mechanic,” she said.

When she enlisted in 1978, Robinson said women were still a rarity in the military, as well as the aviation field.

“We couldn’t go to sea on ships at that time, and I really didn’t end up going to sea on a ship until five years before I retired because they finally had a billet for me to be able to fill. That was in the late 1990s,” she said.

Robinson said she doesn’t recall facing any issues with those whom she worked with due to her gender.

“It was one of those things that if you as a girl pulled your weight and did your job and didn’t complain about it, you were one of the team. I still believe that’s the way it is now,” she said.

Despite being a rarity at the time, Robinson was able to help break down barriers and even accomplish for herself a first for the Navy.

“Since I was in helicopters, I liked the idea of flying them and I could ride in them as a passenger. They opened up a specialty code for what they called Vertical Onboard Delivery Air Crewman, and I flew in the RH-53D at the time, and I was the first female crew chief for the RH-53D in the Navy. That was a blast,” she said.

With her squadron, which included six crewmen, six pilots and three aircraft, they would deploy to the Mediterranean when a carrier would need resupplied. The squadron would bring them resources that were needed.

This was in the mid-1980s when the Communist fleet was “still out there running around with our fleet, creating havoc.”

“The mid-’80s, early ’90s was kind of hot and heavy with stuff going on in the Mediterranean, so it was an interesting time,” she said.

After serving and retiring from the military after 25 years, Robinson and her husband decided to relocate from Corpus Christi, Texas, to be closer to her husband’s family.

“We didn’t know at the time there was a significant aviation industry here,” she said.

Not long after, she began her five-year stint at Pratt & Whitney.

“I started there disassembling engines, and I moved into the engineering department. I wrote the instructions on how to assemble and disassemble engines. They called me an assembly planner,” she said.

Working with Aurora for the past 12 years has been an interesting time with a number of highlights, she said.

“We started out as a privately owned company. We had a contract with (Northrop) Grumman, we built part of the Global Hawk, (which is) the high-altitude surveillance drone that flies around. We built the tail and part of the fuselage for that and then we landed the contract for Sikorsky to build the brand new CH-50K for the Marines,” she said.

There also have been several jobs in between, plus research and development work, she said.

“We were doing research and development for some different companies and probably one of the most significant things that I liked that we did was prototyping Sikorsky S-97 Raider, which is the new X2 Technology. It has a counter-rotating rotor with a pusher prop, and this is going to be probably the new concept of helicopters because it can go over 200 mph,” she said.

Also in conjunction with Boeing, Aurora is building the DEFIANT X helicopter, which is a long-range assault aircraft.

“What they are trying to do with that is that’s going to be the new replacement for the H-60, the big helicopter that flies everything down in the Army. … That’s pretty neat technology,” she said.