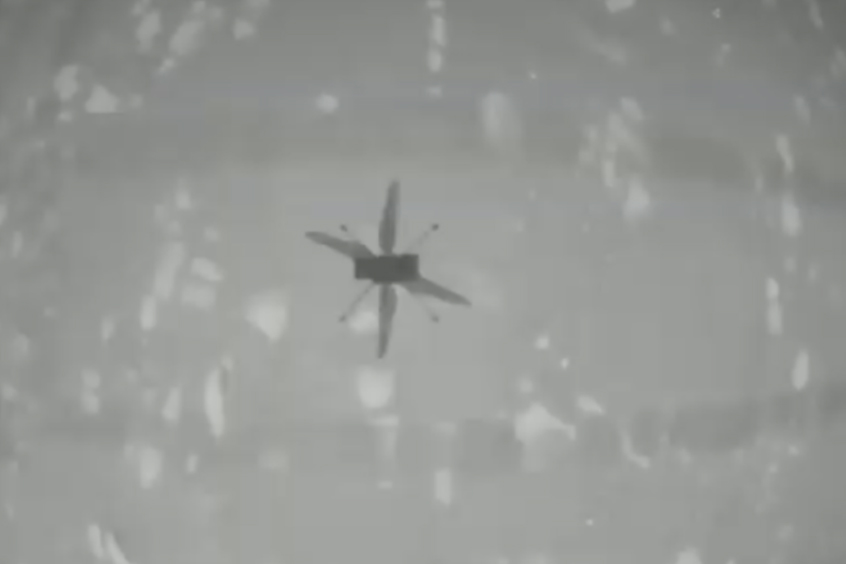 NASA has flown a small rotorcraft on Mars, marking the first powered controlled flight of an aircraft on another planet.

The US space agency says on 19 April that helicopter “Ingenuity” ascended to 10ft above the surface during a 39sec flight. The aircraft hovered, turned 96° and hovered again before landing.

“The team has been working for over six years toward a dream and this morning our dream came true,” says Mimi Aung, Mars helicopter project manager at JPL.

It is the first of a planned five test flights of the sophisticated drone. The flights will become increasingly complex in the final two weeks of the aircraft’s 30-day flight-test window.

“This flight was all about proving that it is possible to fly on Mars,” says Ingenuity’s chief pilot Havard Grip. “This is a flight we have done thousands of times before, but in simulation. And to see it finally happen on Mars and to happen exactly the way we imagined it is just an incredible feeling.”

The agency released a video of the flight that was filmed from the Mars rover Perseverance, as well as a photograph that Ingenuity took of its own shadow.

Ingenuity’s second flight will take place no earlier than 22 April, Aung says. During that test, the rotorcraft will climb to about 16ft, fly laterally about 2m (6ft) and return. The third planned flight will direct Ingenuity to climb to 16ft, travel about 50m laterally and return to its take-off location.

The team will be experimenting with different speeds, Grip adds.

“We will be pushing the envelope and really stretching and understanding how well we can fly,” Aung adds, saying the team will attempt to fly the rotorcraft a distance of hundreds of meters.

The biggest problem for the team is the exceedingly thin Martian atmosphere – pressure at the surface of the red planet is only 1% of that on Earth. In addition, Mars has just one-third of Earth’s gravity. The team was also concerned about problems caused by dust or sand, kicked up by Ingenuity during take-off and landing.

“Ingenuity is actually healthier than before,” says Bob Balaram, Mars Helicopter chief engineer at JPL. The aircraft shook off dust that had settled on its solar cells in the past days, and all of the components – like the batteries, communications equipment, avionics and landing gear – “behaved flawlessly”.

“She is in a perfect state,” he adds.

Ingenuity, which arrived Mars in the “belly” of Perseverance on 18 February, is a small robotic rotorcraft that weighs about 1.8kg (4lb) and has a rotor diameter of approximately 1.2m (4ft), NASA says.

Perseverance deployed Ingenuity earlier this month by dropping it on a 10 x 10m patch of the planet’s surface. The rover retreated to an elevated overlook from which it will be observing Ingenuity’s flights. Free of Perseverance, Ingenuity deployed solar cells, generating electricity to power internal heaters intended to prevent the drone from freezing.

The airfield used by Ingenuity has been designated “Wright Brothers Field”, in honor of US brothers Orville and Wilbur Wright, who first flew a powered aircraft on Earth, the Wright Flyer, in 1904. Ingenuity is also carrying a postage-stamp-sized piece of fabric from the original Wright Flyer.

The rover and helicopter were launched from Earth on 30 July 2020.