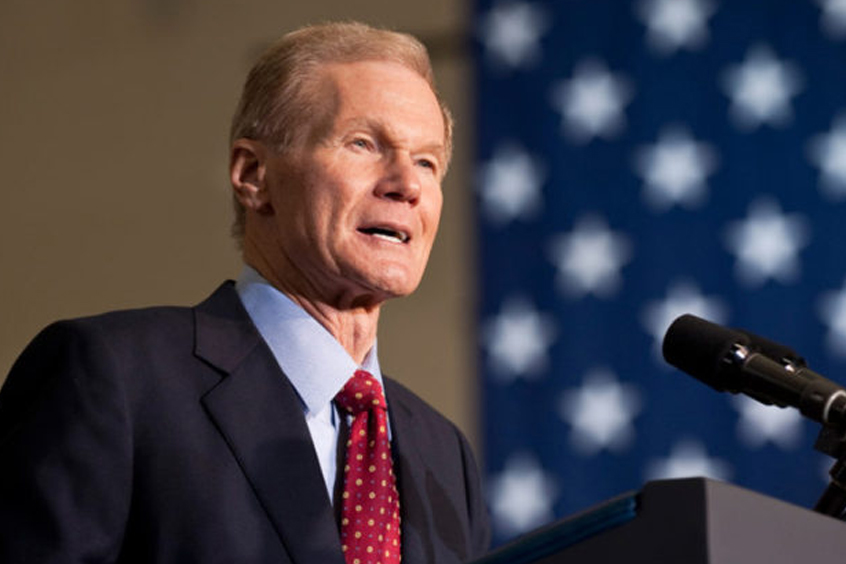 Vice President Kamala Harris gave the oath of office to Nelson at the Eisenhower Executive Office Building in Washington. Only a handful of guests and a media pool were in attendance, and the swearing-in ceremony was not broadcast live on NASA TV.

In brief remarks, Nelson thanked Harris and President Joe Biden, also former senators, for demonstrating “this kind of confidence in an old buddy from the Senate” by nominating him for the position. “It is indeed one of the high honors that anyone could have.”

Nelson didn’t discuss his plans for NASA either in those remarks or an agency statement later that day. “I want to thank Steve Jurczyk for his leadership as acting administrator over the past few months, helping to carry out the Biden-Harris administration’s priorities and ensure the success of NASA’s goals and missions,” he said in that statement. “You’ve seen the incredible accomplishments at NASA over the past 100 or so days — the proof is in the pudding.”

NASA highlighted those accomplishments in a news release April 29, moments before the Senate confirmed Nelson’s nomination by unanimous consent. Those milestones include some new initiatives by the Biden administration, such as appointing a senior climate adviser as well as establishing an internal working on orbital debris, which the agency had not previously publicized. However, other milestones, like the landing of the Perseverance Mars rover, a commercial crew handover on the International Space Station and the Green Run test of the Space Launch System core stage, involve programs that in some cases date back multiple administrations.

Nelson’s guests included his wife and two children as well as Charles Bolden, the former NASA administrator who was nominated in 2009 at the behest of Nelson, who lobbied the Obama administration to select him.

Pam Melroy, the former astronaut who was nominated April 16 to be deputy administrator, was also there. Nelson said he expects Melroy “surely to be confirmed” as his deputy. The Senate Commerce Committee has not scheduled a confirmation hearing for Melroy, but her nomination, like Nelson’s, has widespread support.

The event stood in stark contrast to the swearing-in of Nelson’s predecessor, Jim Bridenstine, in April 2018. That pre-pandemic event took place in a crowded auditorium at NASA Headquarters, with then-Vice President Mike Pence swearing in Bridenstine. It was followed immediately thereafter by a meeting with agency leaders and Pence.

Bridenstine, who endorsed Nelson’s nomination in March, attended the event virtually, his face on the screen of a laptop held by Bolden. His attendance, Nelson said, shows “the continuity and the bipartisanship with which you run the nation’s space program, particularly NASA.”