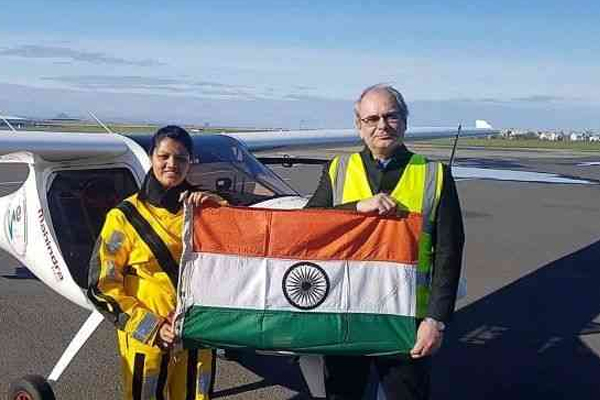 Aarohi Pandit, the world’s first woman pilot to cross the Atlantic Ocean and Pacific Ocean solo in a light sport aircraft (LSA), is all set to re-enact again in October.

On October 15, 1932, J.R.D. Tata, known as the father of Indian civil aviation, piloted the first-ever flight of the Tata Air Services from Karachi to Mumbai, carrying mail in a single-engine De Havilland Puss Moth aircraft.

On October 15, Aarohi Pandit will take off from the Bhuj runway that was rebuilt by the women of Madhapar village within 72 hours during the Indo-Pak war, refuel at Ahmedabad and land at India’s first civilian airport in Juhu (Mumbai), expedition organizer Indian Women Pilots’ Association (IWPA) said in a release.

The Association also said that Ms. Pandit will taxi to the Tata Power hangar at the Juhu Aerodrome for a traditional water salute and reception.

Founded in 1967, IWPA aims at reaching out and educating women about aerospace and aviation and provide vocational guidance on the industry, among others.

India has the highest percentage of women pilots in the whole world, according to the Association.

Operating the same route from Kutch to Mumbai, with similar aircraft limitations and half the fuel, Ms. Pandit will carry special mail from the 1971 Indo-Pak war women heroes of Madhapar village in Gujarat to the young women of suburban villages, in Mumbai, Maharashtra, IWPA said.

During the flight, she will use less than 60 liters of petrol for an estimated five hours of flying over the 500 nautical mile distance, it said, adding Pandit will not be using any GPS, autopilot or computerized equipment, staying below 5,000 ft above mean sea level at all times.

“This JRD Tata Tribute flight is the first of a series of events we have planned for Azadi Ka Amrit Mahotsav, and we couldn’t be happier that it is being flown by our young member, Aarohi, who is already such an inspiration to aspiring pilots for her bravery and focus,” said Harpreet A De Singh, President IWPA, and Fellow, Aeronautical Society of India.

“Pandit has chosen to honor India’s first gentleman of aviation – JRD Tata, in such a memorable and respectful way, is something we are very proud of,” she added.

In 2019, the young women pilot, hailing from the western suburb of Borivali, became the world’s first woman to cross the Atlantic and Pacific Oceans and the Greenland icecap, solo in a light sport aircraft, Mahi VT-NBF.

She will be using the same aircraft to re-enact the historic flight of 1932, it said, adding that the five-year-old Pipistrel Sinus weighs only 330 kg and has the distinction of landing at more places on the planet than any other Indian registered aircraft – 86 at last count, across Asia, Europe and North America.

“We are delighted to support Aarohi Pandit, she endeavors to recreate this historic journey. Tata Power is proud to be associated with this historic event in our 75th year of Independence. It is a true tribute to the vision of JRD Tata,” said Praveer Sinha, CEO & MD of Tata Power.

Ms. Pandit said that being a young pilot, she was honored to have this opportunity to pilot this flight.