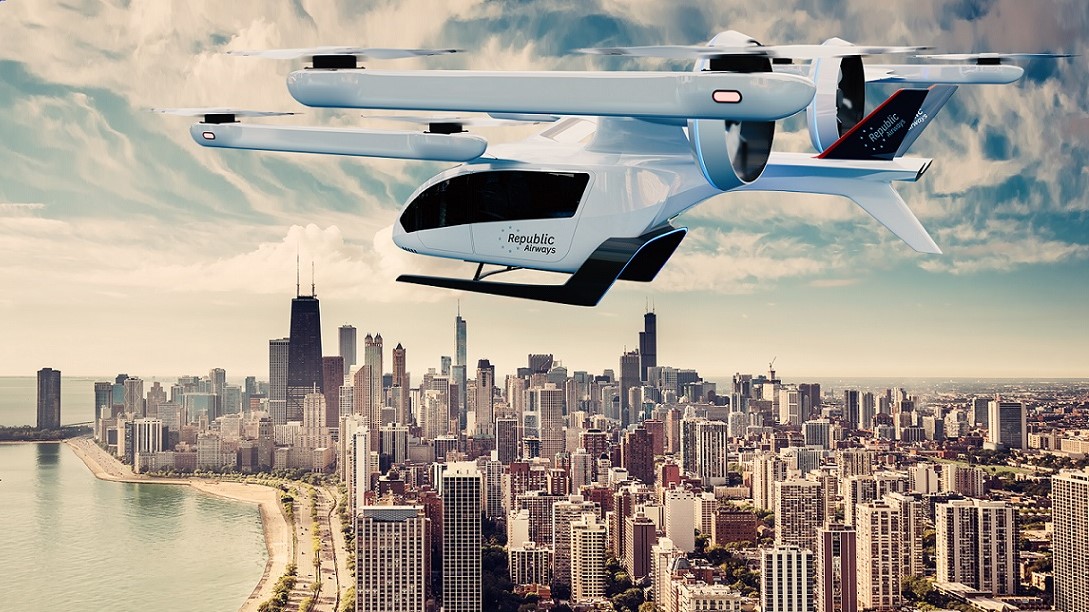 Eve Air Mobility, and Republic Airways Holdings Inc., recently announced a Memorandum of Understanding and Letter of Intent to purchase up to 200 of Eve’s electric vertical takeoff and landing aircraft (eVTOL) to explore additional opportunities within its subsidiaries, such as LIFT Academy,  that are focused on workforce development initiatives and the future of air travel. The strategic relationship will focus on developing a deployment network throughout the Central and East Coast markets of the United States, with an initial focus on the Boston, New York and Washington, DC markets.

In preparation for the first Urban Air Mobility (UAM) flights with Eve’s aircraft, the companies have agreed to establish a working group that will study the requirements of future AOCs (Airline Operating Certificates) where Eve’s aircraft can be deployed in specific markets and missions. This same working group will also examine the feasibility of additional services from other types of urban air vehicles, which could further expand access into new markets

“Republic’s commitment to provide sustainable aviation solutions to our codeshare partners, American, Delta and United, relies on continued investments in both workforce development and emerging clean technologies. The strategic relationship with Eve builds upon decades of a successful relationship with Embraer that has expanded access to regional airports across the country, and we believe Eve’s UAM platform could play a critical role in our future workforce development initiatives,” said Bryan Bedford, President and CEO of Republic Airways.

“This partnership is a new chapter of a longstanding alliance and a shared tradition of excellence between Republic and Embraer, and now Eve. Republic has the expertise of flying extensive route networks in the United States that are similar to what we expect to see with UAM on a different geographical scale. Beyond that, the deployment of our eVTOL will provide millions of passengers in the country with a faster and better solution as their last-mile option,” said Andre Stein, co-CEO of Eve.