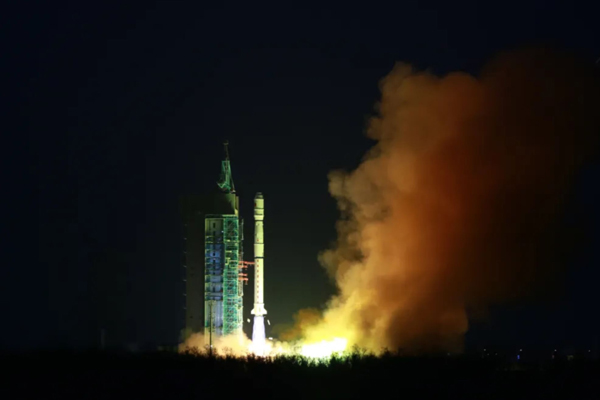 China successfully conducted its 54th and 55th orbital launches of 2021 recently, launching satellites from the Jiuquan and Xichang spaceports within hours of each other.

A Long March 3B rocket lifted off from launch complex 2 at Xichang in southwest China at 11:43 a.m. Eastern Wednesday, carrying the communications technology test satellite-9 (TJSW-9) into geosynchronous transfer orbit.

The TJSW-9 satellite was manufactured by the China Academy of Spaceflight Technology (CAST) but no further details were revealed, suggesting it has at least partial military uses.

Xichang’s launch complex 2 has now hosted 100 launches, and the first in China to reach the milestone. First missions included Long March 2E rockets launching Badr-1 for Pakistan in 1990 and the Australian Optus B1. The number also includes the disastrous 1996 first launch of the Long March 3B carrying Intelsat 708.

The satellite is stated by CASC and Chinese media to be used for mapping, as with earlier Tianhui satellites. The Tianhui-1 (04) was launched earlier this year, but Wednesday’s was the first of the Tianhui-4 series.

US space tracking cataloged two objects in orbit, with one being Tianhui-4. As the second stage of the Long March 2D usually performs a deorbit burn, it is unknown if a second satellite or dummy payload is also now in orbit with Tianhui-4.

As with TSJW-9, no details of the satellite’s capabilities were divulged, implying military purposes.

The pair of launches complete an unprecedented year of launch activity for China, far surpassing the previous record of 39 launches conducted by China in 2018 and 2020. The 55 launches do not include claims of a hypersonic vehicle test, recently reported by the Financial Times.

In contrast China launched 19 times in 2015, all using CASC’s Long March rockets. The country is now launching more than twice as many missions, while also greatly increasing total mass launched and fostering a commercial space sector.

A number of other firms have worked towards launch, establishing infrastructure to support plans, including Landspace and CAS Space. The former is expected to launch its Zhuque-2 methalox rocket in the first quarter of 2022, while CAS Space aims to debut the country’s largest solid launch vehicle in the same timeframe.

A new eastern spaceport for sea launches and an expansion of facilities at Jiuquan are also in development to host the expected growth in commercial launches.

A new commercial spaceport in Ningbo, east China, has this year gained support and could relieve bottlenecks as China’s state-led and commercial launch activity expands.