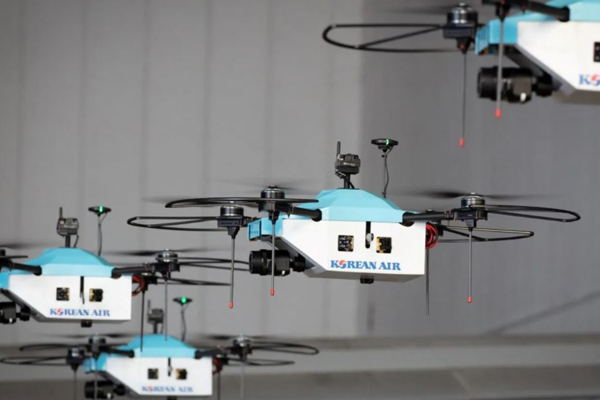 Korean Air has developed aircraft inspection technology that can examine airplane condition using drone swarms. The technology will be ready for commercial use in 2022.

The drones are one meter in width and height, and weight 5.5 kilograms. The airline’s drones, which are equipped with high performance cameras, can detect micro defects up to 1 mm in size.

In addition, drone swarms can speed up inspection of the aircraft. According to Korean Air, simultaneous drone usage reduces the aircraft inspection time from 10 hours to four hours and improves on-time operations. Aircraft fuselage can be examined by four drones simultaneously.

“Whereas maintenance specialists previously had to perform a visual check of the aircraft fuselage from heights of up to 20 meters, drone inspections improve workplace safety and allow for increased accuracy and speed,” Korean Air announced in a statement dated December 16, 2021.

After the aircraft examination, Korean Air drones automatically share its data through the cloud so that personnel are able to check inspection results at any time.

However, in case of a drone failure to examine the aircraft, “the system is configured to automatically complete the mission using the remaining drones”.