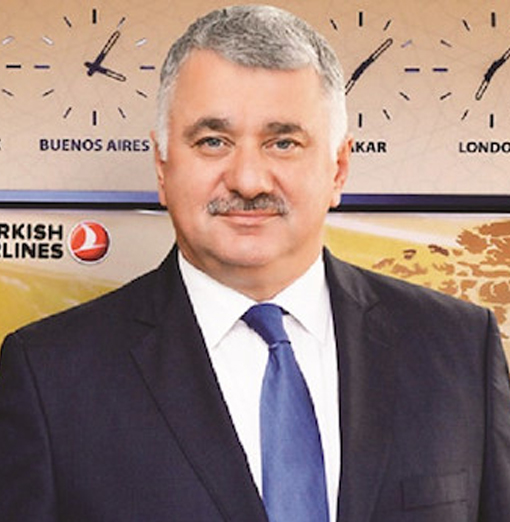 Bilal Eksi is the CEO and the Deputy Chairman of the Board and Executive Committee of Turkish Airlines. He has held those positions since October 21, 2016 after former CEO Temel Kotil was called to lead the country’s military and civilian aircraft manufacturer, the Turkish Aerospace Industries (TAI).

Eksi was the Director General of Turkey’s General Civil Aviation when he was appointed the CEO of the national carrier. During his tenure at the agency which began in 2011, Turkey was reelected as a member of the Council of the International Civil Aviation Organization (ICAO).

Born in 1968 in Rize, Eksi graduated from Yıldız Technical University, the Department of Electronics & Communications Engineering in 1989.

After graduation, he began his career as an Electronics and Communications Engineer at Turkish State Railways where he was later assigned as Workshop Manager at Istanbul Ulasim

A.S., and played an active role in realizing many transport projects for the country.

Eksi later moved to Turkish Airlines and became the head of the Overhaul Workshops (2003-2005) responsible for overseeing the maintenance of aircraft engines, landing gears and all components.

In 2005, Eksi was assigned Chief Ground Operations Officer at Turkish Airlines where he accomplished significant projects, particularly improving the on-time departure performance of the carrier.

He also served as the Chief Production Officer at Turkish Technic in 2008 and 2009 and as General Manager of Cyprus Turkish Airlines as part of the reorganization of Cyprus Turkish Airlines in 2010, and; as the Executive Vice President at “Turkish Engine Center (TEC)” – established by the Joint Venture of Pratt Whitney, the American Engine manufacturer, and Turkish Technic Inc. between 2010 – 2011.