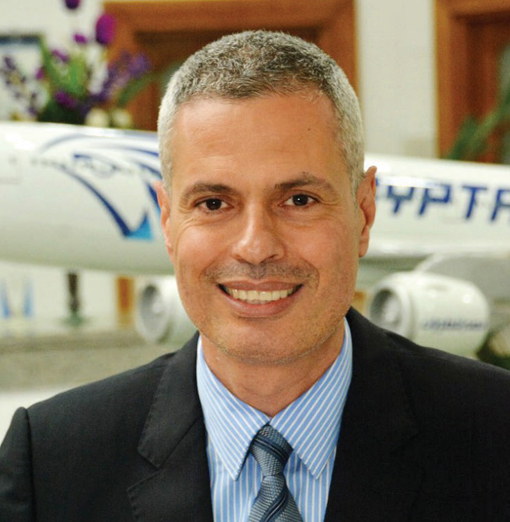 He joined EGYPTAIR, the national carrier of Egypt, as a pilot in 1998, and hence, brings with him more than 30 years of aviation experience. Since 2007, he has been an Instructor Pilot and an Examiner on Airbus A330 and A340, becoming an ECAA certified inspector in October 2012.

As Chairman and CEO of EGYPTAIR Holding Company, he leads a group of nine subsidiaries, providing a diversified range of services and capabilities, primarily directed at serving flight operations.

During his career journey, Capt. Adel has held a number of administrative and technical positions within EGYPTAIR Holding Company and subsidiaries, which have greatly contributed to the airline’s major turnover and enhancing its corporate strategy.

In 2009, he was appointed as GM Flight Training, where he supervised the Development and Innovation of all flight crew members’ training activities.

In 2010 he was assigned deputy VP Operations, followed in early 2013 as Vice Chairman EGYPTAIRExpress, playing a key role in leading the Regional & Domestic carrier.

In June 2013, Capt. Adel became VP Flight Operations, supervising and managing all flight operations as well as safety and security of inflight operations. He was then promoted to Vice Chairman of EGYPTAIR Holding in 2013, overseeing several high strategic committees and adopting quality improvement in all Group subsidiaries.

In addition, he liaised with the Egyptian airports to enhance quality of services.

He was EGYPTAIR’s official spokesman till June 2018 and chaired the management crisis team of MS 804 in May 2016.