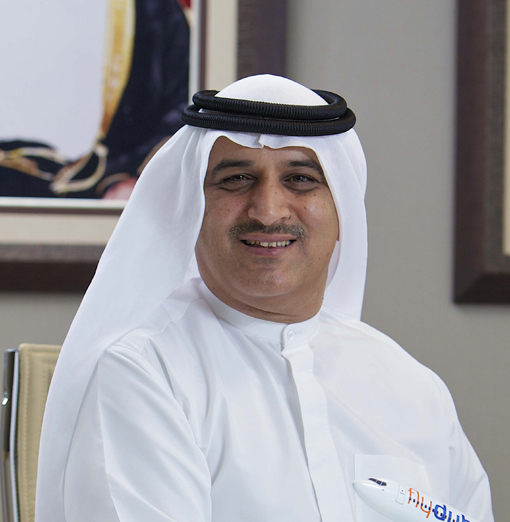 As CEO of Dubai’s ﬁrst low-cost carrier ﬂydubai, Ghaith Al Ghaith is responsible for the strategic direction of the airline, working closely with its Chairman, His Highness Sheikh Ahmed Bin Saeed Al Maktoum.

At the helm of ﬂydubai since its inception on 1 June 2009, he has brought together a dynamic team to build a ﬂeet of 49 Boeing 737-800NG aircraft ﬂying to a route network that spans more than 90 destinations across the Middle East, North Africa, Subcontinent, Asia – and more recently, Central and Eastern Europe.

Al Ghaith is keen to draw attention to how ﬂydubai’s brand livery came about – a striking blend of blue and orange representing Dubai’s climate, landscape and coastline. He explains: “We are very proud to carry the UAE ﬂag and we wanted to have a very clear connection to Dubai in our livery.”

Al Ghaith holds a Bachelor of Science degree in Business Administration from the University of Arizona, USA. He was awarded Personal Achievement of the Year at the Aviation Business Awards 2011, as well as Aviation CEO of the Year at both the 2011 and 2009 CEO Middle East Awards.