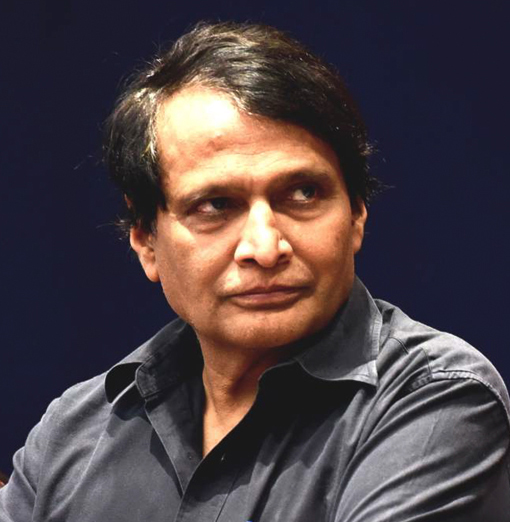 After Mr. Ashok Gajapathi Raju resigned as the Minister of Civil Aviation due to political differences with the National Democratic Alliance (NDA), the Prime Minister has given Mr. Suresh Prabhu additional charge of the Ministry, along with the Ministry of Commerce and Industry.

Mr. Suresh Prabhakar Prabhu is a qualified Chartered Accountant with a Law degree. He is known as a man of action, having penchant for undertaking reforms and scripting turnarounds.

He is well respected for his impeccable integrity, passion and commitment towards society at large. In a short span as the Minister for Commerce and Industry, he has highlighted areas  such as trade promotion, investment promotion, boosting domestic manufacturing and institutionalizing evidence informed policy making – where a focused approach will be adopted.

Introducing the Agriculture Export Policy, setting up Investment War Room, implementation plan for Make in India 2.0 and setting up a Data Analytics Unit are some of the steps being taken to address each of the areas, respectively.

A complaint resolution mechanism through social media, innovative project financing by leveraging extra budgetary resources, quantum jump in infrastructure creation and integrating sustainability into the core strategy of Railways are just some of his successes.

Four times Lok Sabha MP, he is currently representing Andhra Pradesh in The Rajya Sabha. As the Minister for Power he transformed the Indian power sector by introducing the landmark Electricity Act, 2003. He was chosen to Chair the Task Force for Interlinking of Rivers.

Mr. Prabhu is known as a global visionary and renowned thought leader. He has travelled to over 100 countries and engaged with various international forums. He featured among the top three Indian leaders of the future by Asia Week magazine, Hong Kong in its cover story “Giant on the Move.”