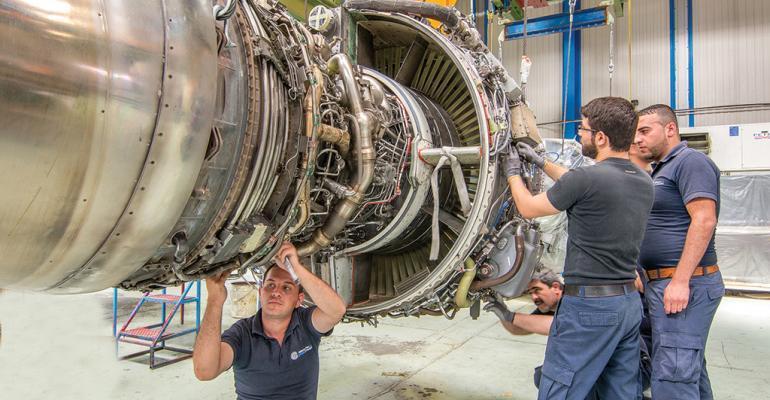 “By 2028, our forecast projects the worldwide feet will total 37,978 aircraft, up from the 2018 total of 26,307. Narrow-body aircraft will be the biggest beneficiary of
this expansion, increasing from about 56 percent of the feet in 2018 to 66 percent in 2028 thanks to operating costs, range, and capabilities that allow them to encroach on territory once reserved for wide-bodies.”

With air travel forecast to steadily grow over the next few years, airlines are expected to keep the industry of maintenance, repair and overhaul (MRO) busy and wealthy with spending for upkeep conservatively forecast to grow 4.6% year-on-year.

Europe’s leading aircraft manufacturer Airbus points out the cumulative value of MRO activity will be in excess of US$1.8 trillion by 2035. It estimated the annual industry MRO spend to grow 4.6 percent year-on-year from US$53 billion to US$132 billion annually.

“On an annual basis, Airbus predicts that the MRO spend will grow from $53 billion to over $132 billion per year,
representing an average year-on-year growth of 4.6%. Aftermarket services activity is inherently linked to the growth of the passenger fleet in general – which will more than double from 19,500 commercial aircraft over 100 seats at the end of 2015 to almost 40,000 by the year 2035,” Airbus pointed out in its first Global Services Forecast (GSF).

Much of the growth is seen to come from Asia-Pacific where the number of middle class is rising every year. Europe and North America will account for about a third of the total market outlay.

That, along with the willingness of many airlines to spend on upkeep for older planes, is making the MRO industry healthy.

“By 2028, our forecast projects the worldwide fleet will total 37,978 aircraft, up from the 2018 total of 26,307.
Narrow-body aircraft will be the biggest beneficiary of this expansion, increasing from about 56 percent of the fleet in 2018 to 66 percent in 2028 thanks to operating costs, range, and capabilities that allow them to encroach on territory once reserved for wide-bodies,” Oliver Wyman said in its Global Fleet & MRO
Market Forecast Commentary 2018–2028.

“Across economies—both developed and developing—increases in gross domestic product (GDP) and disposable
income, as well as expanding middle classes , are producing an unprecedented global demand for passenger air travel and cargo transport.In China, where the size of the middle class now equals the population of the
United States, demand for air travel is expected to grow 9.5 percent annually between 2018 and 2028, despite a slight slowing in economic growth over the same 10 years,” it said.

By 2028, more than half of fleet are designed and built after 2000. That would keep operating costs down over
the near term. At which time, aircraft built in 2010 or late—equipped with advanced sensors, data collection,
analytics , and autonomous functions—will make up more than 36 percent of the fleet.

“According to our forecast, 54 percent of the aircraft to be retired over the next decade date back to the 1990s. Another 34 percent were built in the 1980s, and 12 percent were made in either the 1970s or post 2000. Those most likely to be mothballed are smaller-capacity narrow-body planes, regional jets, and turboprops,” OliverWyman said.

Recycle and reuse The Aircraft Fleet Recycling Association (AFRA), the leading global organization
for developing and promoting the safe and sustainable management of end-oflife aircraft and components, says about 12,000 aircraft would be retiring over the next two decades.

With environmental issues a major global concern, AFRA would be advocating for smarter ways in tearing
down an aircraft.

Current business practice typically seeks recovery of 800-1,200 parts that can be used as spares and the rest for
recycling. Recovery prospects, however, differ by model and age.