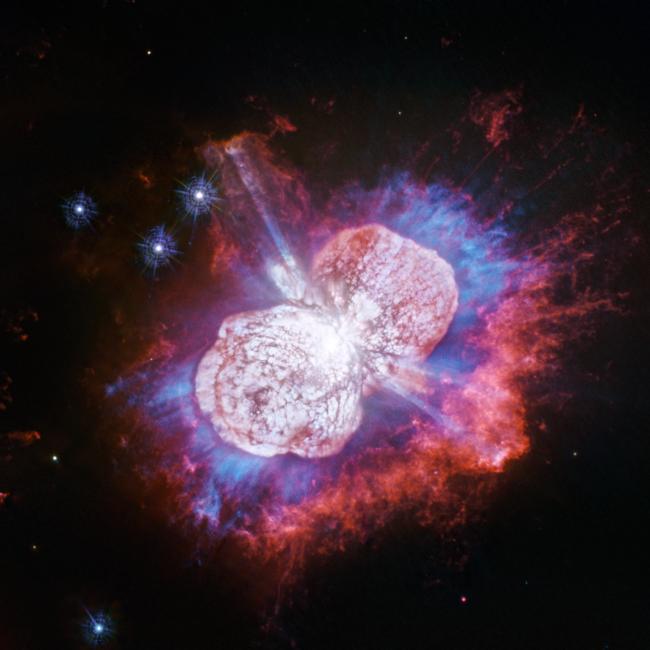 The Hubble Space Telescope caught one spectacular show as the outburst of a supermassive star glows in bright, exploding fireworks.

The star, called Eta Carinae, first erupted 170 years ago and was the second-brightest star in our sky for a little more than a decade. However, over time, the star has slowly faded and become harder to see with the naked eye.

Hubble has observed the star for 25 years, according to a statement by NASA. Most recently, astronomers used its Wide Field Camera 3 to map the ultraviolet light glow of magnesium embedded in warm gas, and found the gas in places where it had not been before.

“We had used Hubble for decades to study Eta Carinae in visible and infrared light, and we thought we had a pretty full accounting of its ejected debris,” Nathan Smith, a researcher at the Steward Observatory at the University of Arizona and lead investigator of the Hubble program, said in the statement. “But this new ultraviolet-light image looks astonishingly different, revealing gas we did not see in other visible-light or infrared images.”

This newly discovered, NASA might have ejected gas from the star right before it expelled the bipolar lobes on either of its sides, and is therefore crucial in understanding how the star’s eruption began, according to a statement.

“This extra material is fast, and it ‘ups the ante’ in terms of the total energy for an already powerful stellar blast,” Smith added.

Eta Carinae is known for its eruptions, which may be due to there being three stars being gravitationally bound within the same system, and will likely die in a supernova explosion, according to NASA.