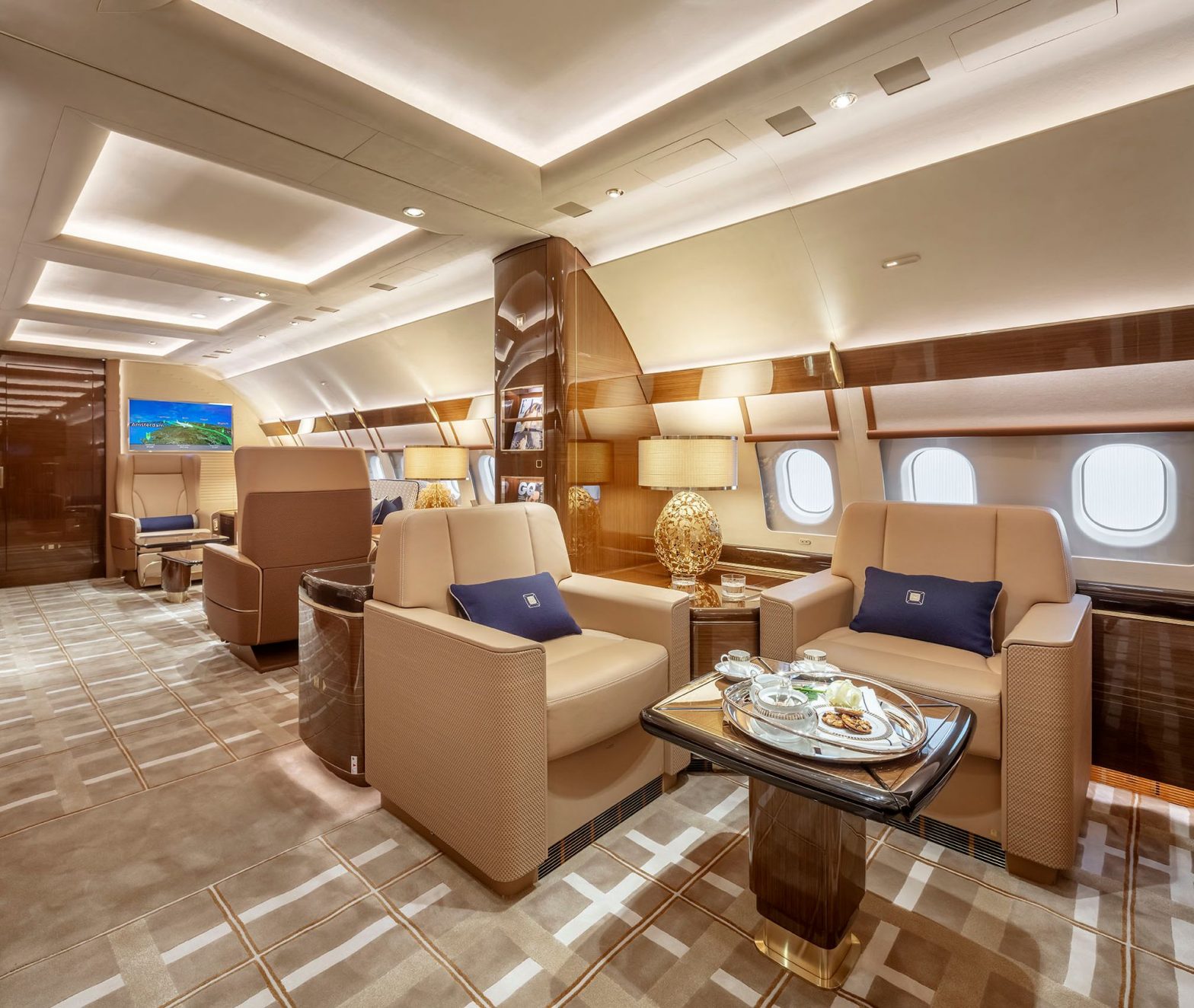 Acropolis Aviation, the UK VVIP charter operator, announced recently the arrival of G-KELT, its brand-new ACJ320neo.  The aircraft touched down at Acropolis’ Farnborough Airport home on 27th February, the culmination of 13 months’ cabin outfitting by Basle, Switzerland based AMAC Aerospace.  Its distinctive, elegant cabin interior was overseen by designer Yves Pickardt from Alberto Pinto.  He congratulated the AMAC team, who have “brought our design to life beautifully.”

G-KELT takes long-haul flying to a new level.  It brings stylish accommodation for 19 passengers, including a private master bedroom leading to a luxury en-suite bathroom with a rectangular shower, the largest ever to be installed in an Airbus single-aisle aircraft.  Cabin space is versatile to suit Acropolis’ diverse clientele, from heads of state to private individuals flying for business or leisure.

There is an emphasis on wellness throughout, reflecting that Acropolis Aviation’s ACJ320neo, the first in a new family for Airbus, is capable of flying over 12 hours.  It features a full-sized kitchen galley for food preparation and an induction oven, enabling the preparation of fresh quality food, without any fumes or odours. With an average cabin altitude of 6,400 ft to enhance cabin well-being, G-KELT has been fitted with an aircraft cabin air humidifier to ensure clients have a comfortable on-board experience, enabling them to arrive refreshed after an overnight flight.

The very latest technology is provided by Collins Aerospace cabin management system, Venue, along with its inflight entertainment system, Stage, allowing hundreds of movies and TV programmes to be viewed on 19 individual iPads and four large TV screens throughout the cabin.  Collins is also providing its Viu LED mood interior lighting system, while its moving map display Airshow features on the four large cabin screens. The aircraft is also fitted with superfast wireless Wi-Fi via Ka-Band internet connection.

“We are absolutely delighted with the high quality of workmanship that has gone into the creation of G-KELT since it arrived green in January 2019,” said Acropolis Aviation CEO Jonathan Bousfield. “AMAC Aerospace has created something very special, which will set new standards of comfort and well-being within the VVIP charter market, fully utilising the cabin space.”

“We are thrilled to be starting this new decade with the arrival of G-KELT, which we look forward to showcasing to the industry soon,” he added.

“It is with great pleasure that we have executed this completion project for Acropolis Aviation, one of the world’s leading private aviation operators, commented Bernd Schramm, Group Chief Operating Officer of AMAC Aerospace.  This unique mission adds to the excellent reputation that AMAC has earned in the market, which we have continuously demonstrated over the last 20 VIP / 25+ VVIP and refurbishment/modification projects.”

Arrangements are underway with Airbus Corporate Jets (ACJ) to show the aircraft on the static display during EBACE 2020 in Geneva.  Fittingly, Acropolis became the first customer for the new family at the show in May 2015.