Pilot error cause behind flydubai crash 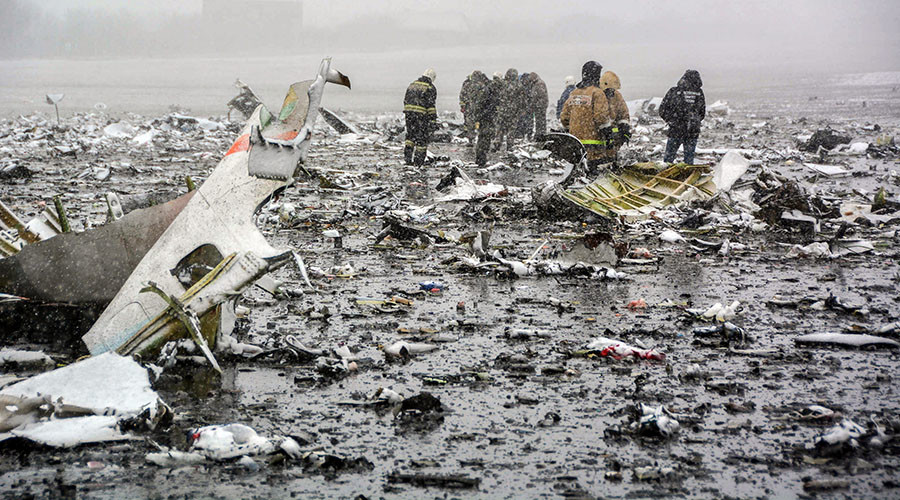 Investigators believe that somatogravic illusion did not trigger the fatal Flydubai Boeing 737-800 accident sequence at Rostov-on-Don but might have contributed to a critical error by the aircraft’s captain.

Somatogravic illusion is the tendency – in the absence of visual references – to incorrectly perceive acceleration as an increase in pitch attitude, a perception that can lead pilots instinctively to make nose-down inputs even if the aircraft is flying level.

The 737 had been executing a go-around in darkness as it conducted its approach to Rostov’s runway 22 on 19 March 2016. It accelerated into a climb, entering the cloud, before transitioning to a dive after the captain made nose-down control column inputs and applied excessive stabiliser trim.

Russia’s Interstate Aviation Committee estimated the gravito-inertial forces experienced by the crew during the go-around, to analyse whether the perceived pitch deviated from the flight-data recording of the aircraft’s actual pitch.

While the analysis has limitations, says the inquiry, it nevertheless indicates four “substantial” periods of deviation – with the gravito-inertial angle greater than the actual pitch – which would serve as prerequisites for the ‘pitch-up’ illusion.

Official United Arab Emirates comments to the inquiry expressed the view that the captain had fallen under the influence of this illusion just 2-3s after initiation of the go-around, and that he remained affected during all subsequent actions.

“The investigation team does not agree with this position,” says the Interstate Aviation Committee. “The presence of conditions for the somatogravic illusion is necessary, but not sufficient, condition for its actual effect on the pilot.”

It points out that the illusion tends to manifest itself only once pilots are out of visual contact with the horizon or other references, and are not adequately monitoring instruments. When the go-around was initiated, however, the Flydubai 737 was operating in visual meteorological conditions with a cloud base at around 420m (1,380ft).

With the captain being able to see both the instruments and the external environment, it is ‘highly unlikely’ that he would have been affected by the illusion in the early stage of the go-around, says the inquiry.

It adds that analysis of the information available indicates that the nose-down column inputs and the initial use of nose-down stabiliser trim were probably not attributable to somatogravic ‘pitch-up’ illusions.

As the captain applied stabiliser trim, for an unusually long period of 12s, the aircraft transitioned through negative g-forces into a dive.

This subjected the crew to conditions for the “most intense” illusion, the inquiry says. But it states that, by this point, the captain was already “completely disoriented” and that the potential impact of any illusion, as opposed to the effects of other stress factors, cannot be assessed. There is no evidence that the first officer had suffered spatial disorientation, it adds.

Investigators have concluded that somatogravic illusion “did not have crucial importance” in terms of the onset of the accident sequence, although they acknowledge that it “might have had some impact” on the captain’s decision to apply nose-down stabiliser trim for an excessive period of time.