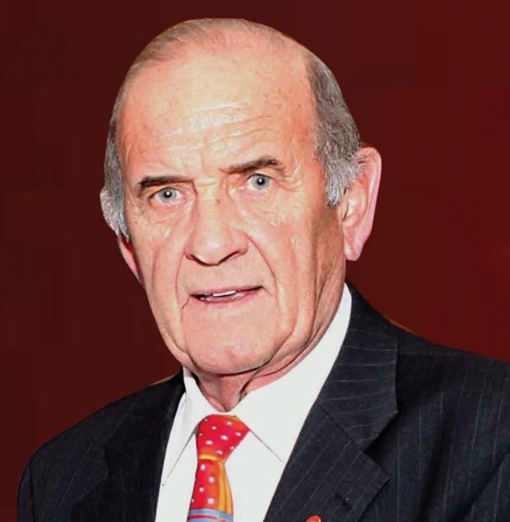 Colm McLoughlin was a member of the consultancy team from Aer Rianta, the Irish Airport Authority, which was contracted by the Dubai Government to launch the new duty free operation in 1983. Mr. Colm remained in Dubai as General Manager of the new operation, later becoming Managing Director and being named Dubai Duty Free’s Executive Vice Chairman in July 2011. Under the Executive Vice Chairman’s leadership, Dubai Duty Free has grown dramatically over the past 32 years during which the business grew from US$20 million (1984) to Dhs6.999 billion (US$1.917 billion) in 2014.

Mr. Colm is a recipient of several personal awards including the Frontier ‘Lifetime Achievement Award’, the ‘Galway Millennium Man of the Year’, the ‘Most Distinguished Employee Award’ from the Dubai Government Excellence Awards and the ‘Businessman of the Year’ from the Middle East Business Awards. In 2013, Mr. Colm was presented with The ‘Sir Michael Smurfit Business Achievement Award’ which was presented at the 25th Annual American Celtic Ball hosted by the Irish Chamber of Commerce USA (ICCUSA) held in New York. The award recognizes his leadership over the past thirty years and he joins a list of renowned business leaders from Ireland for their significant contribution to international business. He was also presented with the ‘CEO of the Year’ at the 3rd Asian Leadership Awards, and the ‘Lifetime Achievement – Editor’s Choice Award’ at the inaugural Conde Nast Traveller ME Awards in 2013.

In 2014, he was named one of the ‘People of the Year’ by The Moodie Report, a highly-respected online industry publication, ‘Best Manager of the Year’ at the Europe Business Assembly’s Socrates Awards held in London. He also received the 4th Asian Leadership Award “Hall of Fame” award and the ‘Outstanding Contribution to Business’ Award at the CEO Middle East Awards organised by ITP Publishing. This award recognizes his achievements and leadership skills during his distinguished career with Dubai Duty Free.

Mr. Colm was presented with the Irish Presidential Distinguished Service Awards for Business and Education category, making him one of a select group of people, and the first Irish person living in the UAE, to be recognized by the Irish government for his outstanding contribution to Irish business and communities abroad.

Mr. Colm has the overall responsibility for the operation and its subsidiary businesses, which include The Irish Village, The Century Village, the Dubai Tennis Stadium, home to the Dubai Duty Free Tennis Championships, and the Jumeirah Creekside Hotel.

Born in Ballinasloe, Co. Galway, Ireland in 1943, Mr. Colm is one of five, with two elder brothers and two younger sisters. He attended the village Boy’s National School and Garbally College, where he excelled in sport including hurling and tennis and went on to play rugby for Co. Galway. He began his retailing career in London in the 1960’s working for the popular high-street chain of Woolworths, before moving back to Ireland to work for Shannon Duty Free.

In July 2012, Dubai Duty Free successfully raised a US$1.75 billion loan facility to finance the expansion plans at Dubai International Airport. The facility received strong support from a syndicate of 26 international, regional and local banks.

Married to Breeda, Mr. Colm has three adult children and two grandchildren. A single handicap golfer, he is also the former Captain of the two golf courses in Dubai: the Emirates Golf Club (1995/1996) and the Dubai Creek Golf & Yacht Club (2007). He is the only person to have held both captaincies. He also holds a private pilot’s license for light aircraft.