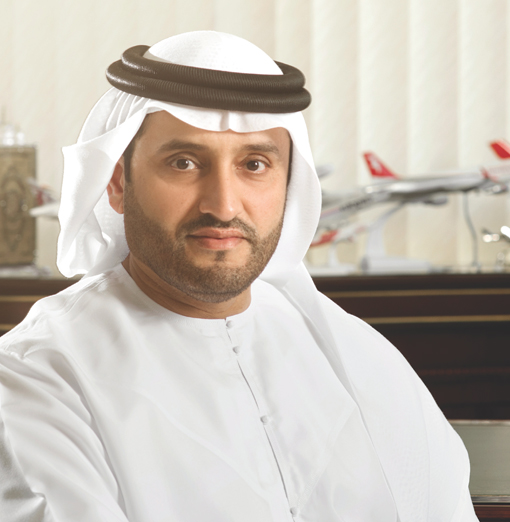 With over 25 years of experience in the aviation ﬁeld, H.E. Ali Salim Al Midfa, is one of the leading UAE experts in airport management and air transportation sector.

In April 2014, he was appointed by H.H. Ruler of Sharjah as Chairman of Sharjah Airport Authority and became a member of Sharjah Executive Council. Since then Sharjah Airport continued to achieve remarkable growth rates in passenger and flight movements. Currently, Mr. Al Midfa is heading the development team for the airport expansion project, which will increase the terminal capacity to over 20 million passengers after completion.

Al Midfa also serves as Chairman of Sharjah Aviation Services Company (SAS), Chairman of DUFRY Sharjah, and Chairman of Sharjah Airport Travel Agency (SATA). He holds several positions in domestic and international aviation bodies and was recently elected as the Second Vice President of ACI Asia-Pacific Regional Board. He was also elected for two consecutive years to the position of Member of Airports

Council International for the Asia-Pacific region, and Chairman of the Jury for the ACI Young Executive Award 2021.
Under his leadership, Sharjah Airport continues to strengthen its position, being a global gateway to Sharjah in the UAE. With support from various international carriers operating into Sharjah Airport, Ali Al Midfa’s vision for Sharjah Airport is to implement state-of-the-art technology to enhance the travel experience for the passengers and airport users.

Working in one of the fastest growing regions in the world, Al Midfa believes their excellent customer service tremendously helped in Sharjah Airport’s growth and they are ready to meet future challenges with innovations and creative solutions.