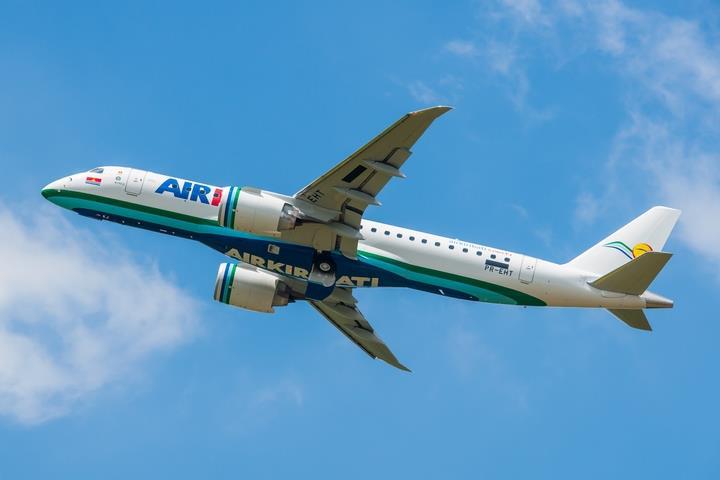 Air Kiribati, the flag carrier of the Republic of Kiribati, received recently its first E190-E2 jet. Embraer announced the contract with the Government of Kiribati, in partnership with its national airline, Air Kiribati, in December 2018. The airline ordered two E190-E2s and has purchase rights for two more. “Aviation is critical for any island nation and Kiribati is no exception. Our Government has made the conscious decision to take into our hands the opportunity to unlock economic prosperity for our people and our nation through the purchase of these two aircraft,” said Hon. Willie Tokataake, Minister for Information, Communication, Transport and Tourism Development of the Kiribati Government. “The arrival of our first jet today is the culmination of three years of vision, strategic thought, government focus, research, evaluation, hard work, commitment, partnership and a good measure of problem solving.” Air Kiribati is the launch operator for the E190-E2 in Asia Pacific. The aircraft will be configured in a dual class layout seating 92 passengers in total, with 12 seats in business class and 80 seats in economy class. Located in the central Pacific, Air Kiribati can now fly longer domestic and international routes than it currently does with its turboprop fleet. “This is first E190-E2 delivered in the Pacific region,” said Cesar Pereira, Asia Pacific Vice President, Embraer Commercial Aviation. “We’re are honored that Air Kiribati selected the E190-E2 as the best fit for the airline’s challenging flying environment. The E190-E2 has cutting-edge technology and is the most fuel efficient and environmentally-friendly single aisle jet in the world. These attributes are extremely important for Kiribati.” With a maximum range of up to 2,850 nautical miles, the E190-E2 can serve destinations throughout the vast expanse of Kiribati, including nonstop from Tarawa to Kiritimati (Christmas) Island, one of the most challenging routes in the Pacific. The current domestic flight from Tarawa to Kiritimati requires an international stopover in Fiji. Spanning four time zones and comprised of more than 30 islands, Kiribati is the only country in the world to be in all four hemispheres. Embraer has been present in the Pacific since the first Bandeirante was delivered to a customer in Australia in 1978. The company continues to support operators across Oceania more than 40 years later. The E190-E2 is the first of three new aircraft types in the E-Jets E2 family, developed to succeed the first-generation E-Jets. Compared to the first-generation E190, the E190-E2 burns 17.3% less fuel and nearly 10% less than its direct competitor. This makes it the most efficient single-aisle aircraft on the market. The E190-E2 generates significant savings for airlines in terms of maintenance costs. It has the longest maintenance intervals – 10,000 flight hours for basic checks and no calendar limit in typical E-Jets utilization. This means an additional 15 days of aircraft utilization over a period of ten years. The E2 cockpit features advanced Honeywell Primus Epic 2 integrated avionics. Combined with closed-loop fly-by-wire controls, the systems work together to improve aircraft performance, decrease pilot workload and enhance flight safety. From a passenger perspective, the E2 cabin features a comfortable two-by-two layout. The absence of a middle seat enables passengers to have an enjoyable flight experience with more legroom and additional luggage storage space. Embraer is the world’s leading manufacturer of commercial aircraft up to 150 seats with more than 100 customers across the world. For the E-Jets program alone, Embraer has logged more than 1,800 orders and 1,500 aircraft have been delivered. Today, E-Jets are flying in the fleets of 80 customers from 50 countries. The versatile 70 to 150-seat family is flying with low-cost airlines as well as with regional and mainline network carriers.