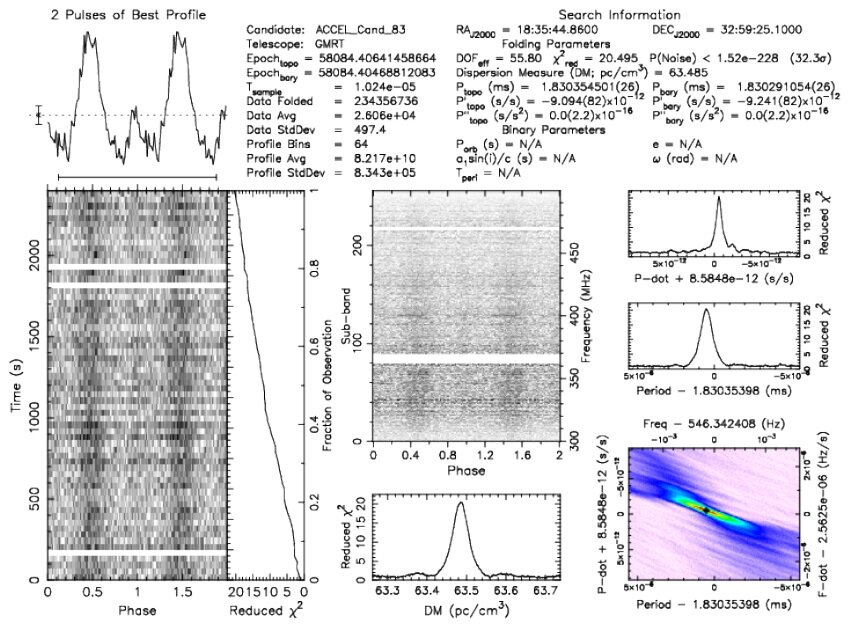 An international team of astronomers reports the discovery of a new millisecond pulsar in the globular cluster NGC 6652. The newly found pulsar received designation PSR J1835−3259B. The study detailing the finding and disclosing fundamental parameters of this object was published in May on the arXiv pre-print server.

Pulsars are highly magnetized, rotating neutron stars emitting a beam of electromagnetic radiation. The most rapidly rotating pulsars, with rotation periods below 30 milliseconds, are known as millisecond pulsars (MSPs). Astronomers assume that they are formed in binary systems when the initially more massive component turns into a neutron star that is then spun up due to accretion of matter from the secondary star.

Now, a group of astronomers, detected another MSP as part of the upgraded Giant Metrewave Radio Telescope (uGMRT) survey. During radio observations of eight GCs at 400 MHz and 650 MHz with the new GMRT Wideband Backend (GWB) system of the uGMRT, they found that NGC 6652 hosts a rapidly spinning pulsar.

“In this paper, we presented the results of a GC pulsar survey we performed with the new wide-bandwidth receivers of uGMRT to search for steep-spectrum pulsars at 400 MHz and 650 MHz. We observed eight GCs and searched each cluster for isolated and binary pulsar systems with segmented and full-length acceleration and jerk search techniques. We discovered a new MSP binary, J1835−3259B in NGC 6652,” the researchers explained.

PSR J1835−3259B is the first pulsar discovered by uGMRT. It has a spin period of about 1.83 milliseconds, orbital period of nearly 1.2 days, and dispersion measure of approximately 63.5 pc/cm3.

The results show that PSR J1835−3259B is a wide orbit binary system with a relatively small eccentricity. The astronomers estimate that the characteristic age of this MSP is at least 430 million years and that the strength of its surface magnetic field is not greater than 350 million Gauss.

The study found that the median mass of the companion object in PSR J1835−3259B is most likely 0.21 solar masses, assuming the pulsar mass at a level of 1.4 solar masses. The researchers suppose that the companion is a helium white dwarf as the obtained results are consistent with that of MSP systems containing such objects.

Besides the detection of PSR J1835−3259B, the research also estimated the flux density and spectral indices of all pulsars in the eight GCs investigated. It turned out that PSR J1835−3259B is the brightest of all pulsars among all others in these clusters. Moreover, the astronomers identified three radio sources not associated with any known pulsars in NGC 6652. Further observations are required in order to untangle their nature.