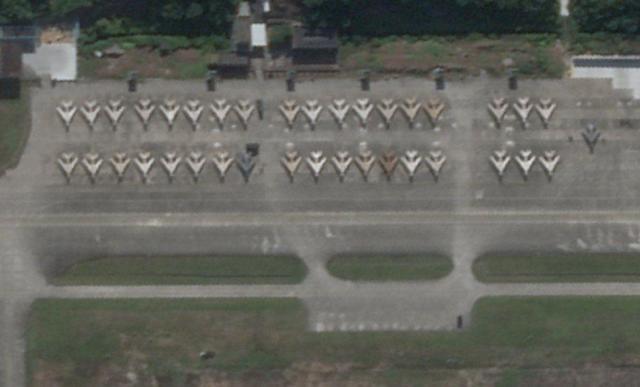 China has for the first time showed off retired 1950s era fighter jets that have been converted to unmanned drones, with satellite photos of two of its east coast bases near Taiwan showing a large number of the jets on site.

The People’s Liberation Army’s Eastern Theater Command published the photos of two Shenyang J-6s on its Weibo social media account during a post about the ceremony marking the start of the training cycle for the second half of 2021 for a training brigade.

The photos were taken at an unknown airfield, with the ceremony also including a banner for the occasion that was digitally altered to remove the identity of the training brigade. The five-digit serial numbers on the J-6s that would identify the unit they belong to have also been digitally blurred.

This practice of blurring the serial numbers, which could be used to identify the unit the aircraft is assigned to, is common to officially released images of People’s Liberation Army Air Force (PLAAF) aircraft, suggesting that the J-6s are still in active service.

Both aircraft were otherwise left unpainted, although both carried three hardpoints for external stores on each wing.

The J-6 is a Chinese copy of the Soviet Mikoyan-Gurevich MiG-19 interceptor, whose manned version was officially retired from PLAAF service in 2010. By that time, the type was regarded as obsolete by all measures, with the basic J-6 not even equipped with a radar.

Since then, numerous J-6s have been seen on satellite imagery of two airbases in China’s coastal provinces opposite Taiwan. The airframes on these bases, Liancheng in Fujian province and Yangtang-li, which is also known as Xingning, in neighbouring Guangdong province, are parked in neat rows at the airbases.

Reports emerged from 2013 that China had converted the type into unmanned aircraft, for use either as a decoy to overwhelm adversary air defenses by their sheer numbers or as a rudimentary unmanned combat aircraft.

A satellite photo of Liancheng, taken on Sept. 15 and provided to Defense News by Planet Labs, showed 50 J-6s on the group, with nine of these pictured next to the base’s 7,830-foot runway.

Updated imagery for Xingning is not available, however satellite imagery taken in April 2020 showed 29 J-6s at the base, with older satellite imagery of the base published on Google Earth showing aircraft taxiing on the ground in March 2013, October 2014, and as recently as December 2018.

They have also been seen at different parts of the bases in satellite photos taken over the years, further suggesting that these aircraft are active and have not been mothballed.