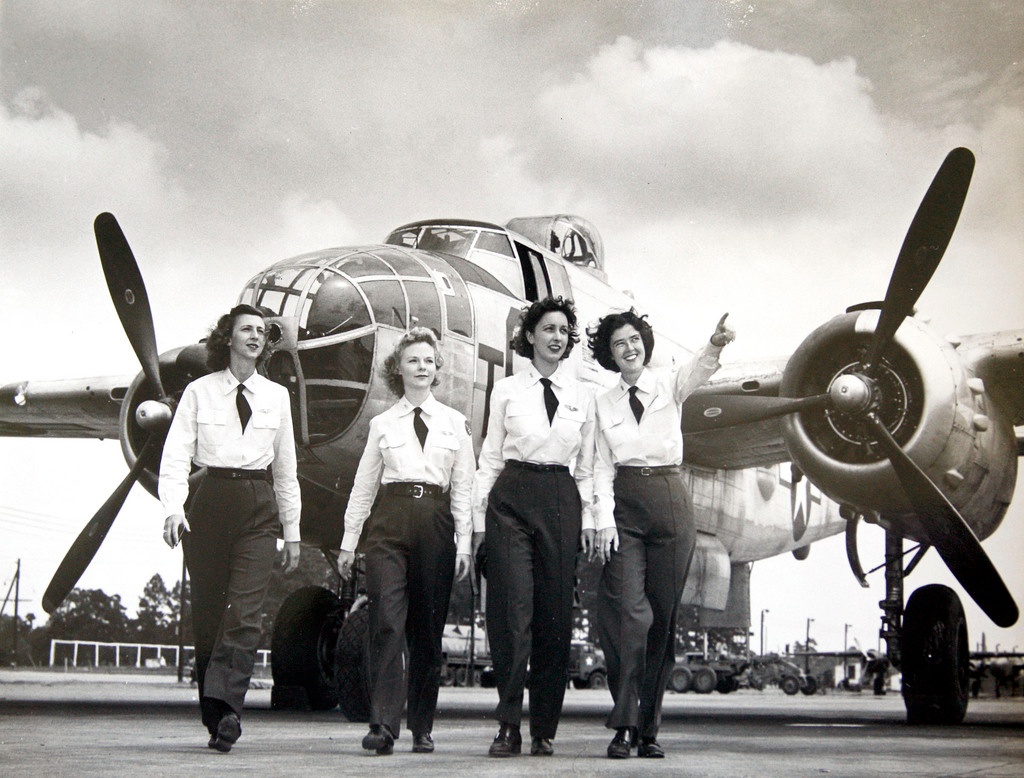 Who were the first American women to fly? To earn their pilot’s licenses? What are their stories? Meet the determined women who took to skies at a time when opportunities for women were severely limited.

On September 16, 1910, Bessica Raiche made the first accredited solo flight by a woman in the United States. Raiche was considered a “new” woman of the 20th century because she drove an automobile and wore bloomers. In addition to being an accomplished musician, painter, and linguist, she also participated in typically “masculine” activities as swimming and shooting. While studying music in Paris, Raiche became intrigued by the flying of the Baroness Raymonde de Laroche.

Settling in Mineola, New York, she and her husband, Francois, built their first plane—a Wright type—in their living room. It was in this frail craft of bamboo and silk that she made her solo flight. In October 1910, the Aeronautical Society honored her with a dinner and a gold medal as America’s first woman aviator.

The Raiches expanded their home-based silk, wire, and bamboo aircraft industry into a profitable company, the French-American Aeroplane Company. Eventually, when Raiche gave up flying for health reasons, she embarked on another demanding career as a doctor of medicine. She became one of the nation’s first woman specialists with a practice in obstetrics and gynecology.

Blanche Stuart Scott was the first American woman to take a solo hop into the air, although her flight is not regarded as official.

Always interested in a challenge, Scott became the first woman to drive an automobile coast to coast in 1910. As she passed through Dayton, Ohio, she watched a Wright aircraft in flight, and she received her first airplane ride after she reached California.

Scott’s auto trip drew the attention of Jerome Fanciulli, of the Curtiss exhibition team, who asked her if she would like to learn to fly. While Glenn Curtiss did not share Fanciulli’s enthusiasm for teaching Scott to fly, he agreed to give her lessons. She was the first and only woman to receive instruction from Curtiss. To prevent her aircraft from gaining enough speed to become airborne while taxiing on her own, Curtiss inserted a block of wood behind the throttle pedal. However, “something happened” on September 2, and Scott managed to fly to an altitude of 40 feet (12 meters) in the air. She continued her lessons and made her debut as a member of the Curtiss team at a Chicago air meet on during the first two weeks of October in 1910.

Scott flew for several exhibition teams, performing inverted flight and “Death Dives” from 4,000 feet (1,219 meters). She was bothered by the public’s interest in crashes and the lack of opportunities for women as engineers or mechanics, so she retired from flying in 1916. After a career in radio and film writing, she became a special consultant to the Air Force Museum at Wright Patterson AFB in Dayton, Ohio, into the 1950s.

Despite a very short career, Harriet Quimby remains one of the most popular women aviators. Quimby was the first American woman to earn a pilot’s license and the first woman to fly solo across the English Channel.

Quimby was born in Michigan and eventually moved to California with her family. In 1902 she took a job as a writer for the Dramatic Review in San Francisco and in 1903, she began writing for Leslie’s Weekly in New York City. She attended the 1910 Belmont Park Aviation Meet and was so inspired by John Moisant’s aerial performance that she asked him to teach her to fly.

On August 1, 1911, Quimby received her Federation Aeronautique Internationale certificate and immediately joined the Moisant International Aviators, an exhibition team. She traveled with the Moisant group to Mexico and became the first woman to fly over Mexico City.

Quimby purchased a Bleriot 50 monoplane in France in March 1912 and began preparations for an English Channel flight. Her advisor, Gustav Hamel, unsure of a woman’s ability to make such a flight, offered to disguise himself as Quimby and make the flight for her. She refused and flew from Dover, England, to Hardelot, France (about 25 miles (40 kilometers) south of Calais) on April 16, 1912. She became an instant sensation and returned triumphantly to the US.

On July 1, 1912, at the Harvard-Boston Aviation Meet, Quimby was flying in the Bleriot with William Willard. Suddenly the aircraft pitched forward and Willard was thrown from his seat; the aircraft then flipped over, tossing Harriet out too. Both Quimby and Willard fell to their deaths in Dorchester Harbor.