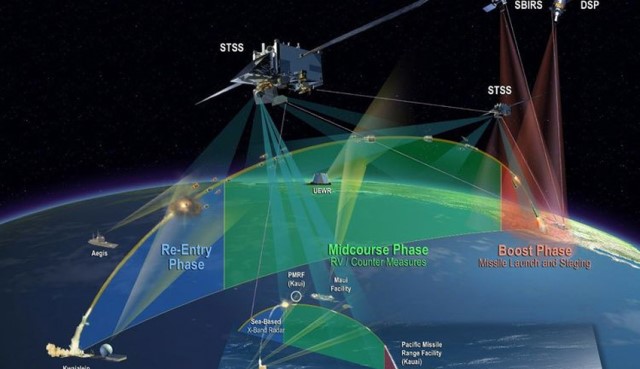 “As far as the technologies go, we’re very confident in our design and we’ve proven it out,” Tara Theret, Northrop Grumman’s Space Solar Power Incremental Demonstrations and Research (SSPIDR) program director, told SpaceNews. “Now, it’s just building, testing and integrating the rest of the hardware on a challenging timeline.”

Northrop Grumman announced the successful demonstration of a key element of SSPIDR, the ability to beam radio frequency energy toward various antennas by steering the beam. The testing was conducted in one of Northrop Grumman’s anechoic test chambers in Baltimore.

Next, Northrop Grumman will “take those findings and translate them into our prototype, which we anticipate launching in 2025 to actually show the capability of beaming RF energy down to the planet,” said Jay Patel, vice president of Northrop Grumman Remote Sensing Programs.

Beyond the prototype for the future objective system, Northrop Grumman will need to shrink electronic components and significantly scale up the quantity of “sandwich tiles,” or panels of photovoltaic cells to collect solar energy and provide power to another layer of components that enable solar-to-RF conversion and beamforming.

“We are currently busy manufacturing our flight hardware so that we can put together this system that we’re going to be launching on our Northrop Grumman ESPAStar platform,” Patel said. (ESPAStar, a satellite bus built around an Evolved Expendable Launch Vehicle Secondary Payload Adapter, provides propulsion, power, attitude control and communications for payloads.)

The US Air Force Research Laboratory awarded Northrop Grumman a $100 million contract in 2018 to develop a payload to demonstrate key components of a prototype space solar power system. AFRL conceived of the flight experiment, called Arachne, to spur the development of technology needed for a prototype space-based system that could provide solar power to remote military bases.

In late 2021, Northrop Grumman showed its “sandwich tile” could convert solar energy to RF power. With the latest demonstration, the company is relying on phased array technology to control the RF beam and steer it toward multiple fixed rectifying antennas.

“It was a very exciting demonstration that allowed us to show the culmination of those different technology milestones that we’ve been developing since the beginning of this project,” Patel said.

Space-based solar power, long a feature of science fiction, is being investigated by government agencies around the world.

The Naval Research Laboratory launched an experiment in 2020 aboard the Air Force’s X-37B space plane that  captured sunlight and converted it into direct current electrical energy. The China Academy of Space Technology announced plans for a 2028 space-based demonstration. The European Space Agency approved plans for a three-year research program called Solaris. And the United Kingdom is offering grants for space solar power studies and technology development.

If solar power can be gathered in space and beamed to the ground, there are many promising applications, Patel said.

“If you have a flood or a hurricane that knocks out power to an area, it takes weeks sometimes for them to get back online,” Patel said. “This system can provide temporary power during those periods until that infrastructure is built back up.”